With the much-awaited ICC World Cup just a few months away, a lot of talks has been going on concerning the team selections. The next few matches that the Indian team will be playing will play a crucial role in determining the squad. The Men in Blue are scheduled to play five ODIs at home against Australia following the conclusion of the New Zealand tour.

There has been a lot of debate over Rishabh Pant’s selection in the upcoming World Cup. Many former cricketers have touted the youngster as an important prospect. The latest to join the bandwagon is former Indian skipper Mohammed Azharuddin. The veteran expects the 21-year-old can be a handy batsman at the middle order.

India and England have been deemed as favorites for winning the 2019 World Cup. The Indian batting looks really strong on paper. Even the bowling has turned up pretty well. Azharuddin stated that there are no ways which suggest that India can’t win the ICC World Cup this year.

Further, the former Indian cricketer vouched for Rishabh Pant in the playing XI. Azhar felt that the wicketkeeper-batsman would be an ideal choice at No.4 in the format. However, at the same time, he highlighted that the youngster needs to work upon his wicketkeeping skills in red ball cricket.

In his recent interview with Midday, Azharuddin said, “I think I would be very disappointed if the Indian team doesn’t win the World Cup in 2019. India has all the talent and ammunition to win the Cup in England. I think India should include Rishabh Pant in the playing XI and he should bat at the number 4 spot. But all said and done, Pant still needs to improve his wicket-keeping skills in the longer format of the game, where focus and concentration come in to play.” 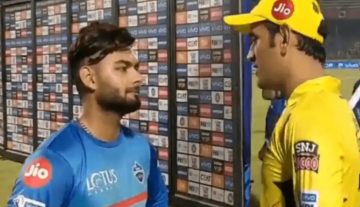 News
By CricShots - May 24, 2022
Sourav Ganguly Feels Its Unfair On Rishabh Pant To Be Compared With MS Dhoni