Videos
Babar Azam Gives A Death Stare To A Reporter After An Inappropriate Question
By CricShots - Dec 31, 2022 10:59 am
Views 155

After the first Test against New Zealand, the press conference of Pakistan skipper Babar Azam ended in a dramatic fashion when a reporter showed impatience after being overlooked by the skipper. The two teams have now been knocked out of the WTC Finals race after the result of the first Test, which ended in a draw.

The last day of the game did not go as planned for either of the teams. Pakistan decided to declare their second innings with a lead of only 137 runs on the final day. It came as a shocking decision as New Zealand started their second innings fiercely. But bad light led to the officials calling stumps early when the visitors were 611 in 7.3 overs, and as a result, the game ended in a draw.

ALSO READ: Umran Malik Reveals The Name Of 3 Indian Players Who He Dreams Of Dismissing

Babar Azam replied to one of the reporter’s questions and after the last question, he was prepared to leave the conference. When he was getting up out of his chair, a reporter from the back yelled: “Ye koi tareeka nahi hain, yaha sawaal ke lie aapko ishaare kar rahe hain (This is not the way, I’m making repeated gestures to ask a question).”

Babar’s response appeared to be in retaliation for a recent event in which a reporter confronted the team’s spinner, Nauman Ali, with an extremely critical question during a press conference. Although the southpaw spinner responded calmly, Babar appeared to have some issues with the tone of the reporter’s inquiry, who stated that Nauman had “scored centuries with the ball.”

Earlier in the match, Babar Azam had played a phenomenal knock of 161 as Pakistan set up a formidable 438 in the first innings. However, the Kiwis responded well, scoring a huge 612/9 thanks to an undefeated double hundred from former skipper Kane Williamson. New Zealand declared the innings as soon as Williamson got to his 200*.

Ish Sodhi scalped six wickets for New Zealand, and Pakistan declared their second innings at 311/8. Imam-ul-Haq fell just four runs short of his century, former skipper Sarfaraz Ahmed countered with a gritty 53, and Saud Shakeel too produced a determined half-century. The two teams will start the second and final Test of the series on January 02, at the same venue. 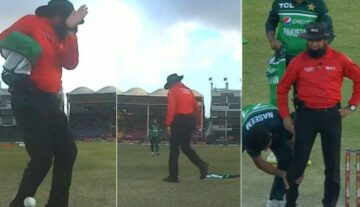 Videos
By CricShots - Jan 12, 2023
Aleem Dar Suffers A Hit After A Throw From Mohammad Wasim Jr