New Zealand resumed the second day with their overnight score of 349/1 with skipper Tom Latham batting on an unbeaten 186 along with Devon Conway who scored 99 not out at the end of Day 1 against Bangladesh. Conway started the day with a boundary and notched up his third century in the longest format of the game.

However, Devon Conway was run out by Mehidy Hasan on the first ball of the 96th over. Ross Taylor, who is playing his final match in Test cricket, walked out to bat after the dismissal of Conway. To pay respect to the veteran Kiwi batter, the Bangladesh cricketers were seen clapping, and the visitors gave a guard of honor to Ross Taylor.

The veteran New Zealand batter, Ross Taylor removed his helmet as he walked to the pitch in response to the beautiful gesture from the Bangladesh players, and the New Zealand veteran batsman shook opposition captain Mominul Haque’s hand before taking guard at the crease. Taylor played a decent knock of 28 off 39 in the first innings of the Christchurch Test before he fell to Ebadot Hossain in the 106th over.

Ross Taylor is set to end his Test career after featuring in 112 matches for New Zealand. The 37-year-old has scored over 7684 runs from 196 innings with 19 centuries and 35 half-centuries.

At the end of Day 2, the visiting team got bundled out for a meager score of 126 with Yasir Ali (55) and Nurul Hasan (41) entering the double-digit scores. For the Kiwis, southpaw pacer, Trent Boult took a 5-wickets haul as he got crucial wickets of Shadman Islam, Najmul Hossain Shanto, Litton Das, etc.

Here is the video of the incident when Bangladesh Players gave a guard of honor to Ross Taylor:

A great gesture for a great of the game 🙌

Ross Taylor is given a guard of honour as he makes his way out to bat for possibly the final time in Test cricket for New Zealand 🥺#NZvBAN pic.twitter.com/ejJjTo5w4v 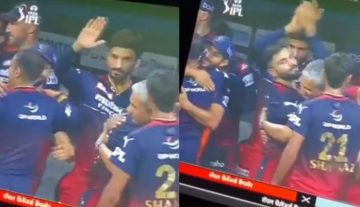