During a recent Big Bash League (BBL) game, a fan got hit in the face by a ball that resulted in a six. Surely it was very hurtful for that fan but his spirit remained unbroken as he returned with the ice pack and refreshing beverage.

That incident happened during the 17th over of Brisbane Heat’s innings against Hobart Hurricanes at Hobart on 29 January. On 16.1 overs of that innings, Heat’s wicketkeeper-batsman Jimmy Peirson was batting and facing the left-arm pacer James Faulkner while his shot went to over long-on for a sixer. It traveled to the on-field spectators while one spectator failed to stop the ball properly and got a hurtful hit in his face.

KFC Big Bash League put the light on that incident by posting the video on their official Twitter account and writing on that, “Very good for Jimmy Peirson who launched this ball into the crowd. Very bad for an old mate, who got hit by the said ball in the face… #BBL08 | @weet_bix”

Very good for Jimmy Peirson who launched this ball into the crowd.

Very bad for old mate, who got hit by said ball in the face… 🤕 #BBL08 | @weet_bix pic.twitter.com/IXmDfeHBFj

A few minutes later, KFC Big Bash League posted another video where we can see that fan who got that nasty painful hit. He returned to the seat with an ice pack and refreshing beverage.

Also watch: Bhuvneshwar Kumar Had The Last Laugh Against Guptill

Posting that video, KFC Big Bash League tweeted, “He’s back! A guy who got hit by six has returned, complete with an ice pack and refreshing beverage. What a trooper #BBL08”

Guy who got hit by six has returned, complete with an ice pack and refreshing beverage. What a trooper #BBL08 pic.twitter.com/cO4tHRP7uW

The heat had the poor start in that game after they were forced to bat first. Struggling on 27/4, Alex Ross and Jimmy Peirson guided the team for a fighting total. While Ross scored 62 off 35 balls (8 fours and only six), Peirson played the knock off 50 runs off 48 balls (3 fours and 2 sixes) before losing his wicket in the last ball of that innings. Heat managed to score 145/6 in 20 overs.

In reply, Hurricanes lost their opener and the skipper Matthew Wade (12 runs) at the very early stage but they didn’t face any further difficulty as they comfortably chased that target in just 14.2 overs after losing the only wicket. Another opener D’Arcy Short and the no.3 batsman Caleb Jewell provided a brilliant 132-run unbroken partnership for the second wicket as Short remained not out on 68 off 41 balls (8 fours and only six) and Jewell was batting on 61 off 38 balls (8 fours and only six). 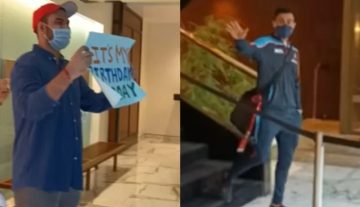 Videos
By CricShots - Dec 6, 2021
Virat Kohli Wishes A Fan On His Birthday In The Team Hotel