Indian pacer Bhuvneshwar Kumar, who was also the man of the match in the first Test between India and Sri Lanka in Kolkata, along with teammate Shikhar Dhawan has been released from the squad for the second Test. The reports suggest that both of them had requested the BCCI selectors regarding the same.

A statement released by BCCI read, “Mr. Kumar will not take any further part in the ongoing Paytm Test series against Sri Lanka and the All-India Senior Selection Committee has named Vijay Shankar as his replacement. Mr. Dhawan is available for selection for the third Test.”

Earlier in the day, India came an inch close to a miraculous victory in the first Test against Sri Lanka at Eden Gardens on Monday, thanks to Bhuvneshwar Kumar (4/8) and Mohammed Shami‘s (2/34) incredible bowling performances after Virat Kohli’s 50th international century helped the hosts set the visitors a stiff target of 231 runs.

Then, India’s lethal pace duo of Bhuvneshwar and Shami wrecked havoc in the Sri Lankan batting line-up within the first four overs. They set the tone to restrict Lanka to 75/7.

In the third innings, it was skipper Kohli did the rescue job for the hosts’ he gave apt answers to all his critics. Virat was at his brutal best in challenging conditions, with the pitch still having some seam moment, as he reached his 18th Test century off just 119 balls, with 12 fours and 2 sixes. The Indian skipper reached his 50th international ton in style with a maximum and immediately declared the innings when he was on 104*. 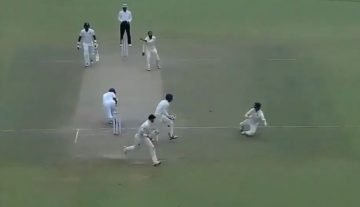