On this day in the IPL 2017, Sanju Samson smacked a sensational century against the eventual finalists Rising Pune Supergiant at the Maharashtra Cricket Association Stadium, Pune. The blitzkrieg led Delhi Daredevils to a 97-run win over the home team in the 9th match of the IPL 10. Sanju Samson undoubtedly was named the Man of the Match.

RPSG Captain Ajinkya Rahane earlier won the toss and chose to field first. Pune fast bowlers began well and nicked out the opener Aditya Tare quite early. Sanju Samson then paired up with the English batsman Sam Billings and both got engaged in the rebuilding process. Imran Tahir broke through and bowled Sam Billings to reduce DD to 71/2 in the 9th over.

The impetus was then provided by Rishabh Pant who came in briefly and smacked 31 from 22 balls. Sanju Samson controlled the ship after that and took off at the rate of knots. Samson struck his maiden hundred of the Indian Premier League which included eight fours and five sixes.

The 22-year-old reached the three-figure milestone with a six off Adam Zampa on the first ball of the 19th over. The Kerala youngster became the 12th Indian and 28th player overall to score the 43rd ton of the cash-rich T20 league. At 22 years and 151 days, he became the second youngest player to hit a hundred in the IPL.

The pain was not yet over for the Pune bowlers, South African Chris Morris came in late and crashed 38 runs off 9 balls with four fours and three sixes. Delhi Daredevils ended up with 205/4 in 20 overs. 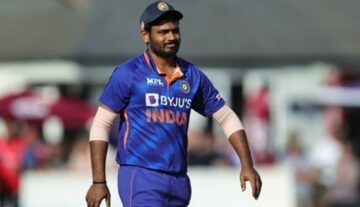