The bowlers in T20 Mumbai made a stunning come back on the third day of the T20 Mumbai tournament. Shivaji Park Lions and NaMo Bandra Blasters emerged as the winners on the day that belonged to spectacular bowling performances.

The average score so far in the tournament lingered around 180. The match before yesterday witnessed 192 runs being overhauled. The balance was restored yesterday as ARCS Andheri got all out for 107 against NaMo Bandra Blasters.

The hungry Lions attacked the Knights vigourously once Surya fell to Shivam Dubey. The innings collapsed from 115/1 to 152 all out. Shivam Dubey was the chief destroyer, he took the first five-wicket haul of T20 Mumbai while giving away only 24 runs in his four overs.

Give it up to Shivam Dubey who takes the first ever fifer in #T20Mumbai history! What an effort by the @SPLionsMum pacer! 👏#CricketChaRaja #SPLvTKMNE pic.twitter.com/L7D2fc8bm5

Dubey was not yet done, though. The Lions safari in the chase was not a happy one as they lost an early wicket. The opener Bravish Shetty stood unharmed at one end guiding the Lions past the target. Dubey coming in to bat at number 5 smacked not out 47(23) with two fours and four sixes to cap off the brilliant day.

The night game brought only darkness for the ARCS Andheri team. After having a breezy start, they failed to carry forward the momentum and got blasted by the NaMo Bandra Blasters.

The veteran leg-spinner Pravin Tambe bamboozled the Andheri batsmen and ended with the unbelievable bowling figures of 4-0-8-3. The off-spinner Aniket Redkar complimented Tambe and bowled a tight spell of 3-0-9-1. ARCS Andheri’s 107 in yesterday’s match is the lowest score in the competition so far.

Pravin Tambe, 46 years, gets Man of the Match award. Foxes batsmen half his age and still remains relevant is this fast format. Amazing. #T20Mumbai

The small target was never going to be a problem for the team brimming with batting talent. Captain Shreyas Iyer 53*(35) and Nikhil Patil 39*(35) steered Blasters home with nine wickets remaining. The Blasters are at top of the points table with this win. 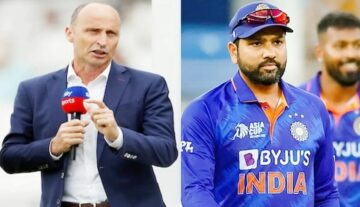