West Indies managed to churn out a draw in the opening Test of the three-match series against England after the Joe Root-led team made a bold declaration on Day 5. Needing 286 runs to win from 70 overs, West Indies lost too many wickets after lunch and they decided to go for a defensive approach and managed to end ta the day at 147-4. Nkrumah Bonner was unbeaten on 38 after facing 138 balls and Jason Holder 37 not out after 101.

Despite the fact that the Test ended in a draw, the Windies all-rounder, Carlos Brathwaite is finding it difficult to digest why England decided to drag the game till the last over of the day. He termed it “disrespectful” when two set batters at the crease still England didn’t decide to call it a draw earlier. Joe Root opted to shake hands with just five of the day’s allocated deliveries remaining.

During a chat with BT Sport, Carlos Brathwaite said, “If I were a senior player in the West Indies dressing room, I would have found it a bit disrespectful that in the last hour, with two set batsmen playing as they were and the pitch offering nothing, England still felt they could get six wickets, going all the way down to five balls.”

A bit disrespectful this

He further elaborated, “Would England have done that if it were an Ashes Test? Would they have done that against India, New Zealand, Pakistan? I think the answer is no, so why have they done it against us? If West Indies need any sort of steely determination added, I think that passage of play should have given them that. They should be thinking ‘we have two Tests now to prove we are better than England think we are’.”

Bonner and Holder made an unbeaten partnership of 80 runs with the former scoring 123 in the first innings as well. Bonner eventually earned the Player of the Match as the hosts escaped with a draw.

West Indies captain Kraigg Brathwaite said Bonner had told him before the Test that the latter wanted to bat more than 30 balls in the game. He explained, “The determination he had was an example for us first innings and today he came again and really showed his worth. He has a special mindset and sets an example for us to follow.” 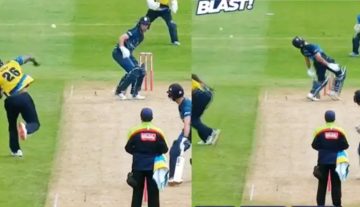 Videos
By CricShots - Jun 21, 2022
Unfair Act From Carlos Brathwaite Led To Warwickshire Getting Penalized For 5 Runs