During the afternoon game against the Royal Challengers Bangalore (RCB), the Rajasthan Royals (RR) started off well. After 7 overs, the team’s score was 62 for 1 wicket. Robin Uthappa and Sanju Samson were batting at the crease and the RCB skipper,  Virat Kohli handed the ball to Yuzvendra Chahal on his trump card. Uthappa smashed a six on the very first ball of Chahal’s over, but then, the bowler came back stronger and sent both batsmen to the pavilion in the same over and his fiancee made the occasion special.

On the fourth ball of the over, Uthappa tried to play the slog sweep but the ball did not come fully on the bat and went straight to fielder Aaron Finch. Uthappa was dismissed for 41 off 22 balls. On the very next delivery, Samson tried to play a big shot. But he too was dismissed by scoring only 9 runs.

Chahal’s wickets made his fiance Dhanashree Verma even more special. Dhanashree was present at the stadium during the match. She was seen celebrating enthusiastically after Chahal took wickets. Uthappa was making his opening debut for the first time this season. Chahal, however, could not take a hat-trick and Jose Butler dropped that ball.

Talking about the match, Chahal took two wickets for 34 runs in his four overs. In this match, Steve Smith won the toss and decided to bat first. Rajasthan’s team scored a score of 177 with Robin Uthappa’s whirlwind knock and captain Steve Smith’s half-century.

Chahal announces his engagement with Dhanashree Verma on August 8. He took to Instagram to post an adorable picture from the ceremony as he confirmed his Rokawith Dhanashree. The engagement ceremony marks the union of both the bride and groom’s family and friends. Roka is one of the most significant ceremonies that take place before an Indian wedding.

In the chase, Aaron Finch was seen vaping in the dressing room, here is the video of the same: 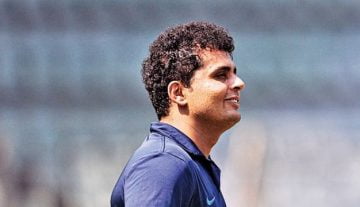