Twitter Reaction
Charith Asalanka Fes Trolled For Not Reviewing Despite Not Nicking The Ball
By CricShots - Jan 10, 2023 8:15 pm
Views 159

Team India is locking horns with Sri Lanka in the series opener of the three-match ODI series at the Barsapara Cricket Stadium in Guwahati. With technology becoming increasingly embedded in cricket, batters enjoy the privilege of challenging the decisions of the umpire. However, Charith Asalanka surprised everyone when he decided to walk back to the pavilion after the umpire ruled him out despite the ball having nicked just his towel.

India has dominated the proceedings in the first ODI so far by amassing as many as 373 runs in the opening game of the series as the visitors are already reeling at 179/7 in 33 overs. Earlier in the game the Sri Lanka skipper, Dasun Shanaka won the toss and asked the hosts to bat first owing to the certain chances of dew later in the game. The Indian openers Rohit Sharma and Shubman Gill both scored half-centuries while Virat Kohli scored a smashing century to help the team to register a score of 370+.

Mohammed Siraj was sensational with the new ball, picking two scalps, and Umran Malik soon followed in his footsteps by troubling the opposition with his fierce pace. The bowler was soon rewarded for his efforts in the 14th with the dismissal of Charith Asalanka albeit a grave revelation made after the replays of the incident came into the limelight and resulted in an amusing moment.

Charith Asalanka attempted to guide the ball toward the fine leg but was strangled by the pace of Malik. A clear sound went up in the air as the ball raced past Mendis’ legs and into the wicketkeeper’s gloves. The umpire soon raised the finger as the bowler went up in appeal and in response, Asalanka did not even bother discussing a potential review with Pathum Nissanka on the other end.

However, UltraEdge later showed that there was no nick and the sound had resonated from the ball brushing the towel tucked into Asalanka’s waist. Sri Lanka captain Dasun Shanaka was visibly upset when replays showed Asalanka had failed to detect that the ball had brushed the towel instead of taking a nick off his willow and walked off without even considering a review.

Here are the videos of the incident:

Twiterrati were quick to notice the sequence of events and soon expressed their sentiments over the incident on social media.

Charith Asalanka did not review and was out caught behind to Umran Malik.. 👀👀#INDvSL pic.twitter.com/RKuXkMkp8a

Charith Asalanka knows it’s useless reviewing it against the Indian umpire’s specially when you are battling against India..

Had he reviewed it, Sri Lanka would have lost a review.. #INDvSL

Commentry level certainly going down these days. Earlier in the day Murali kartik praises Rohit as when Rohit looks good even when he scores duck, and sunny G later says Asalanka does not want to face Umran malik thats why didn't review. @kartikmurali

Did you see that ? Typical blind Indian umpires. But Why the hell Asalanka didn't take that review ?

Remember you have to play against 13 or 14 if you play in India with BLIND Indian umpires.. #INDvSL

So no spike on ultraedge on the asalanka wicket. Should’ve reviewed it but it doesn’t take away anything from the Ind umpire. WTF is this srsly? SL team should complain to authorities lol #INDvSL

Lol Ultra-Edge shows Asalanka was Not Out. Is that right or do we rely on the Ultra-Edge a lil too much? Because i'm sure no batsman would be walking off if he had not edged it. #INDvsSL 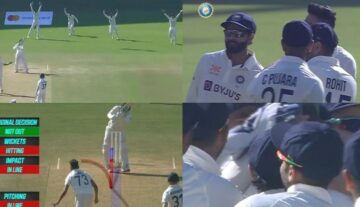