India’s Test specialist, Cheteshwar Pujara became the first batter in 118 years to score three double centuries in a county championship season for his team Sussex. The right-handed batter who is also leading the team has been in ominous form this season and has done exceptionally well and was applauded at the iconic Lord’s.

Cheteshwar Pujara has been witnessing a purple patch in his career and his stunning run with the bat for Sussex continued as he notched up his third double century of the season. The right-handed batter became the first player in 118 years to achieve this feat for Sussex. Cheteshwar Pujara is also the captain of the Sussex team right now.

The star Indian batter played a brilliant knock of 231 from 403 balls against Middlesex at the iconic Lord’s cricket ground. The spectators present in the stadium applauded the senior batter after his brilliant performance. Pujara’s Sussex teammates were also seen celebrating their captain’s fine knock which helped them post a good total.

Here is the video of Cheteshwar Pujara scoring a double century:

Out onto the balcony to stand and applaud a fantastic innings. 👏@cheteshwar1 💯💯 pic.twitter.com/2hmvm9wMz4

Pujara had been named the captain of the side in place of Tom Haines after he got injured before the game. This is Cheteshwar Pujara’s 5th century from the 7 games that he has played so far in the county season.

Applaud and clapping for Cheteshwar Pujara at Lord's dressing room, he scored 231(403). pic.twitter.com/j3UtxSoOrU

Cheteshwar Pujara, India’s No. 3, played the rescheduled fifth Test against England and scored an impressive 66 in the second innings, but India lost the game. During his knock, Pujara was up against his India teammate Umesh Yadav, with the pace bowler representing Middlesex.

At the end of Day 1, the first round belonged to Cheteshwar Pujara as Umesh remained wicketless for 42 runs. Pujara and Umesh had more India teammates playing in different County matches with Washington Sundar picking up four wickets on his Lancashire debut and Navdeep Saini claiming four playing for Kent. 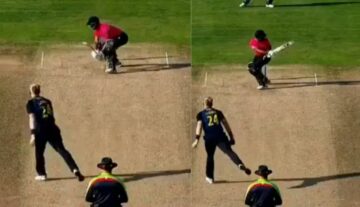 Uncategorized
By CricShots - Aug 13, 2022
Cheteshwar Pujara Smashes 22 Runs In An Over During A Royal London One Day Cup Match