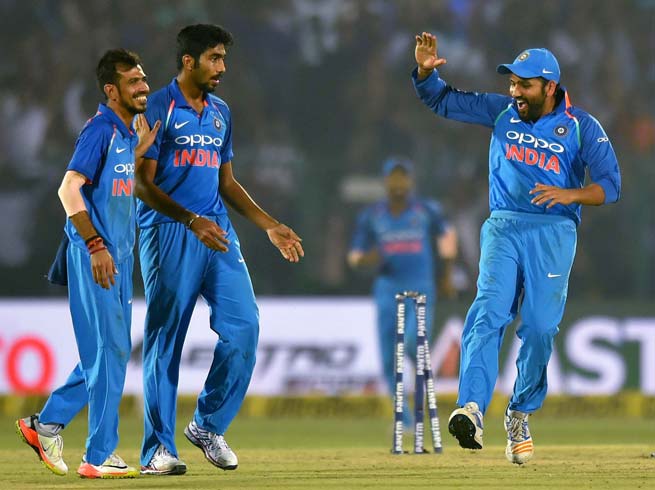 New Zealand batsman Colin Munro sees Bhuvaneshwar Kumar and Jasprit Bumrah as the best new ball bowlers in the subcontinent. Both bowlers are taking Indian cricket team to a new height and in the process, they gifted them victories in several matches.

Munro quoted to PTI “The big challenge for me was just actually finding a good tempo to bat at. I’d like to say that I want to go and blast off in the first 10 overs but it’s not always going to be the case, especially when you are playing against Bhuvi and Bumrah, the two best opening bowlers in these conditions.”

Kiwi team started ODI series with a stunning victory in Mumbai and pushed India on their back foot. However, Team India pulled things in their favor and win the series after beating them in last two ODIs by six wickets and six runs respectively.

In the series decider at Kanpur, Indian pacers pulled something special to win the series with some deadly death bowling which features some top Yorkers.

Now, both teams are ready to lock horns in the first T20 International match on November 1 in Delhi. Interestingly, India has never beaten New Zealand in this format in all the five attempts.

The new Kiwi opener added “We have been lucky enough for the last couple of years to be successful. Looking forward to the series and it should be a good one. I play aggressively, my way sometimes it comes off and you look good, sometimes it doesn’t and you don’t look good. Obviously, there is plenty to play for and we have got a good record against India. Hopefully, we will get off to a good start.”

Meanwhile, he revealed that he took a few advice from former skipper Brendon McCullum, which eventually helped him to score runs in the final ODI.

“It is a funny one, actually, because after the second game I wouldn’t say I was down but I hadn’t got off to a start I wanted to while opening the batting. So, I sent him a text message to ask him his thoughts and let him know what I was thinking. And again he came out and said ‘Mate, you know you got a good record in T20 and the way you play at the top of the order. If you can, try and implement that in the ODI game’,” he concluded.