There is always that special place in every sportsman about football. Even while training, we see many cricketers playing warm up football games. They also follow their favourite football teams closely and express their support for them through social media. We have seen Ganguly, Tendulkar and Kohli investing in Indian Super League Football franchise teams. We have seen cricketers clicking selfies on football grounds during a live match and we have also seen footballers posing with the cricket stars for a pic.

Now there is a new addition to this list, when a cricketer has expressed his desire to play for Manchester United Football club. And that cricketer is none other than the Six Machine himself, Chris Gayle. And you would have thought he is out of any business after the IPL, yeah? Gayle absolutely loves his Twitter and Instagram accounts and his visit to the Old Trafford was well accounted for. Gayle shared details on his latest visit to Old Trafford, the home of Manchester United football team and said, “Meeting went well with the new manager…once I get my terms then I will sign with @manchesterunited”. This was accompanied with a pic of Gayle holding the Man. Utd. scarf in his hand. Further he added a pic with a Manchester United jersey printed with Universe Boss entitled on the back and his jersey number 333 on it. Gayle captioned the pic “Top Striker.”

The reference to the Universe Boss came when West Indies Twenty20 skipper Darren Sammy had said that Gayle was unfairly treated. Gayle also added a short video where he showcased his football skills to the world. He captioned this video “Best signing this year so far. #mufc #United ⚽️”

After a not-so-good season both on and off the cricket pitch, will the West Indies superstar make a switch to football with none other than English Premier League giants Manchester United? At a time when Mourinho is looking to add more firepower to United’s armoury, Gayle’s signing could prove to a be a jackpot for the club. Having characters like Swedish star striker Zlatan Ibrahimovic, who is also widely rumoured to sign with the Red Devils, and Gayle in the same dressing room should be a treat for players and fans, alike.

The West Indies cricketer is currently in England, where he is playing in the Natwest T20 Blast for Somerset, however, he seems more in form outside the ground rather than inside.

Hoping for a day when cricketers would have studs and would brisk through the green feilds to kick the ball into the nets and not outside the stadium. So, who would be the goal-keeper when Gayle is a striker? My choice, MS Dhoni. 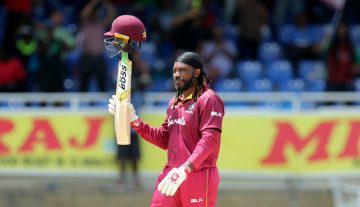