On Thursday, the Indian skipper, Virat Kohli posted a picture in which he recalled MS Dhoni’s exploits in the T20 World Cup in 2016, and it led to the rumors making rounds regarding the retirement announcement of the latter. The speculations were on an overdrive mode regarding the possibility of the Dhoni to call a press conference on Thursday to announce his retirement.

While chief selector MSK Prasad and Sakshi Dhoni made it abundantly clear that nothing of the sort was happening, Chennai Super Kings’ official Twitter handle found an innovative way to shut down the rumors mills. With Dhoni’s retirement talk gaining momentum of Twitter, CSK took a leaf of out Game of Thrones character Arya Stark’s book to stop the speculation. Despite not making direct mention of Dhoni, CSK tweeted: “Not 7oday” — the number seven denoting MS Dhoni’s jersey number.

While some netizens failed to understand the meaning of the tweet, others were quick to appreciate CSK’s creative genius. Here are some of the reactions:

Is this Arya Stark's #NotToday?

What is 7oday
Does this relate to #Dhoni #DhoniInBillionHearts

GoT reference to GOAT… Super admin..

As usual savage level is too damn high😝👊 #DhoniInBillionHearts

Dhoni decided to take a two-month break from cricket after India’s 50-over World Cup campaign ended in the semi-finals. He last played a T20I for India in February 2019, against Australia in Bengaluru. India is all set to host South Africa for a three-match T20I series starting on Sunday, followed by the Test series.

After a poor show in the recently-concluded series against the West Indies, KL Rahul replaced by the young Shubman Gill in the Test squad. India is leading the ICC Test championship points table with 120 points under their belt. 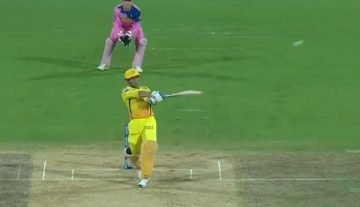