Ahead of the 13th edition of the Indian Premier League (IPL), Rajasthan Royals (RR) batsman David Miller said he is in “awe” of the finishing abilities of MS Dhoni and wants to do the same himself. The South African cricketer will be commencing IPL 2020 with new franchise Rajasthan after he was released by Kings XI Punjab (KXIP) ahead of the annual auction last year.

Describing the same during a recent chat with ESPNCricinfo, Miller said, “I absolutely love the way Dhoni goes about his business. Certainly his calmness — you just think he’s always under control. The way he portrays himself, that’s something he’s extremely good at and I do enjoy that about him. I try and give off the same energy. But in terms of an actual chase, he’s got his strengths and weaknesses as a batsman and so do I.”

Miller further termed Dhoni as ”one of the best finishers ever” and he always loves watching MS play.

David Miller elaborated, “I tend to be in awe of some of his chases rather than ‘I want to bat like him.’ I suppose I just want to finish games as he does. Technique-wise and the way you go about it, we all have our own ways. I don’t think I can rate myself or put myself in a category. Definitely Dhoni is one of the best finishers ever; he’s proven it many times. I love watching him play.”

According to Miller, he is yet to receive a particular role in the RR as of now and the player is getting back to the groove and hitting balls hard in the training.

Describing the same, Miller asserted, “I haven’t had any discussion with [RR head coach] Andrew McDonald so it’s more just preparing and hitting balls and getting back to the swing of things, as I haven’t hit balls for a good few months. It’s about getting your body going, getting the feet going. In terms of plans and roles and stuff, we’re yet to get into that.”

Rajasthan Royals will be locking horns with Chennai Super Kings (CSK) in their opening game on September 22. 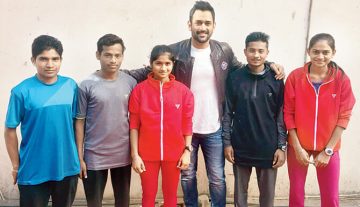