The veteran Australian batsman, David Warner on Tuesday showered praises on his Ashes nemesis Stuart Broad, who recently surpassed the landmark of 500 Test wickets, joking selectors should drop the pace often in future. Broad, who has 501 wickets going into Tuesday’s fifth day of the third Test against the West Indies at Old Trafford, dismissed Warner in all the 10 innings during last year’s drawn Ashes series in England.

Broad’s future was questioned in the national squad after he was dropped from the first Test against the West Indies, only for the pacer to roar back to form in the second Test, then helped his team to win the third and the final Test by scalping nine wickets and a swashbuckling half-century in the first innings.

Talking about the same during a chat with the reporters, Warner said, “I think they should drop him again. I don’t know why they dropped him for that first game but it’d be nice if I was to play there again and he wasn’t playing. I think he’s a world-class bowler. In the past 18 months, he’s really worked hard on pitching the ball up.”

He further added, “He’s obviously got a hell of a record against left-handers, and his capability to bring the ball back off the wicket into the right-hander is another string to his bow.”

Warner said Broad and long-time new-ball partner James Anderson, who has bagged more than 1,000 Test wickets while bowling as a pair, created a high-pressure environment at the crease.

ALSO READ: Virat Kohli Reveals The Influence Of Anushka Sharma In His Life

As per the quotes in NDTV, Warner explained, “You just can’t go after them, they don’t take their foot off the pedal,” he said. These guys have the ability to restrict runs. In England, they bowl a length where if you drive, you’re probably going to nick, (but) they can also hit the stumps, so you can’t just leave it. In English conditions, they know how to get wickets.” 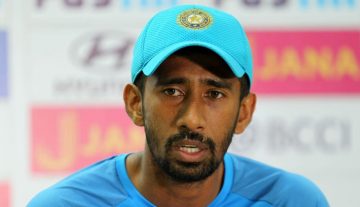 Article
By CricShots - Feb 22, 2018
Wriddhiman Saha Focusing More On The Process Than Results