Sunrirsers Hyderabad (SRH) skipper David Warner’s journey in the Indian Premier League (IPL) 2020 has started on a disappointing note as the SRH captain was run-out in the most unfortunate of manners. He had scored six off 6 deliveries before being run-out at the non-striker’s end in the second over of the match against Royal Challengers Bangalore (RCB).

This was Warner’s first game as SRH skipper after his e-appointed. The game started on a good note for him as he won the toss and asked RCB to bat first. In reply, RCB managed to score as many as 163 for 5 in the allotted 20 overs with debutant Devdutt Padikkal and veteran AB de Villiers scoring fifties.

Padikkal and Aaron Finch added as many as 90 runs in the first 90 overs before departing in quick succession. Captain Virat Kohli did not last long either as RCB found themselves in trouble. However, De Villiers made sure that teh team reaches a respectable total and slammed 51 off just 30 deliveries to ensure RCB end up with a challenging total. For SRH, T Natarajan, Vijay Shankar, and Abhishek Sharma picked one wicket apiece.

In reply, SRH was on a verge of having a good start as Jonny Bairstow and David Warner collected 18 runs from the first nine balls before the latter was run-out. Umesh Yadav, bowling the second over, pitched one up that was hit straight by Bairstow. But before the ball could go past Yadav, he managed to get his hand on it.

The deflected ball went on to hit the stumps and David Warner had was found wanting as he had to walk away as he was standing outside the crease.

Here is a clip of the run-out: 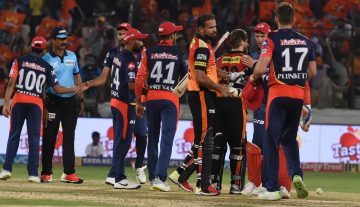