Veteran Australia cricketer David Warner has a lot of fan following in the world. He is also the former captain of the Sunrisers Hyderabad team in the cash-rich Indian Premier League. The Hyderabad-based IPL team has recently posted a photo of him on Instagram as well.

However, as soon as they shared the picture, everyone started commenting and David Warner also interacted with the fans there. Meanwhile, a  female fan of his has commented under that post: “I love David Warner. He is so hot.” To which, David Warner has replied: “Love is both ways.”

Meanwhile, recently David Warner has participated in a Q&A session with his fans on his Instagram. The star batsman has answered questions on many topics, from cricket to Indian movies as well. He also revealed his favourite Indian batsman as well.

David Warner replied: “Very tough question. Obviously, in the modern game Rohit Sharma, Virat Kohli, and Rishabh Pant now as well, he is a fantastic player. In the past Sachin Tendulkar and I always used to love watching VVS Laxman”

However, fans also asked him about Indian movies and Warner replied that Baahubali is his favourite Indian movie. Among the actors, his favourites are – Telugu superstars Prabhas and Allu Arjun. And, David Warner also revealed that he loves Hyderabadi chicken, even though it’s very spicy as well. He also replied to fans’ questions about his franchise – SRH.

While talking about his best moment with the franchise, he said: “Without doubt 2016. Lifting that trophy was an amazing feeling. The guys played well throughout the whole tournament, and to get across the line in that fashion was outstanding. To beat Bangalore at their home ground was even more satisfying.”

Recently, while speaking on the ‘Khelneeti’ podcast, former Indian cricketer Saba Karim opined that the Sunrisers Hyderabad franchise might contemplate bidding farewell to David Warner. Meanwhile, recently, former India player Saba Karim said that the franchise would look to build the team around younger players like Rashid Khan. It will be interesting to see how David Warner will perform when the IPL 2021 will resume in the UAE during September-October. 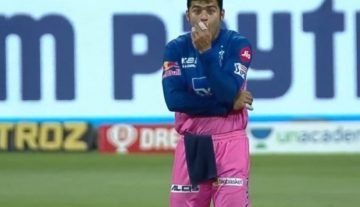