India are all set to take part in the upcoming ICC World Cup which is scheduled to start from May 30 in England. Ever since India’s World Cup 2019 team has been announced, the debates have also started. While the selectors chose Vijay Shankar for the number 4 position, many think Rishabh Pant would be ideal in that place. However, former chief national selector Dilip Vengsarkar thinks KL Rahul would be perfect for the place as he has the technique which makes him suitable for the post.

“We have a settled opening pair in Shikhar (Dhawan) and Rohit (Sharma). Virat Kohli is phenomenal at No. 3. I feel that KL Rahul could be an option at No. 4. He has the technique and can complement the top three well. I believe the No. 4 should be a specialist batsman,” Vengsarkar told PTI during an interview.

India team has struggled to find a suitable batsman for the number four position. Many players have been tried in that position and Ambati Rayudu was one of the first choice players. But he also failed to keep his place and was not included in the 15-member squad.

“Since he is a specialist opener, in case of early wickets, he could provide stability. Also in a long tournament, if required he can open the innings. I feel that he should be a part of playing XI,” Vengsarkar said about KL Rahul.

“In England, the weather can be fickle and that can have an effect on the performance. Adaptability will always be the key. But to Indian team’s advantage, they played in England during the same time last year. We have had an exposure to those conditions and that’s good thing. We should try and use it to our advantage,” he further added.

Also read: Gambhir feels Rohit Sharma would be the next captain after Virat Kohli

He is also confident about Yuzvendra Chahal and Kuldeep Yadav’s form.

“I am sure both Chahal and Kuldeep must have worked on their game as to what went wrong against Australia. Once they get there, they must carefully assess the conditions and accordingly devise the strategy,” he said.

“At this moment I can’t predict about the fourth team. Yes India, England and Australia have the team to go all the way,” he later added. 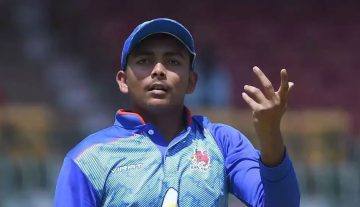