A day after his historic night, in which he peeled off the most thrilling 29 runs in India’s T20I history. The final gave Dinesh a perfect platform to show what he is made of. Coming in to bat when the team needed 34 runs in the last two overs, Dinesh Karthik took the match in his hands and scored a lightning-quick 29 runs off 8 balls to make India the Champion.

The blinding knock has made Dinesh Karthik the Indian hero for the first time in his career which is 14-year old. The young-at-heart wicketkeeper will now be longing for the IPL glory to firmly settle in the memory of fans not as just a standby but as a permanent support. Karthik relives and deconstructs his knock with The Indian Express. Excerpts:

Describing the last ball six, Karthik said, “I knew I had connected very well and it really went very flat. The ground in Sri Lanka is big. As soon as I hit it, I got the feeling that it’s going because the ball had hit the center of the bat, and the bat didn’t turn (in my hand) also. But since it went too flat, somewhere there was a little bit of doubt. It went a little over the rope.”

In the press conference, India’s stand-in skipper Rohit Sharma said that Dinesh was a bit angry about not going to bat at no.6. Describing the same, Karthik said, “I was a little shocked. Angry is a bit strong word, I feel. I have a good rapport with Rohit and I obviously trust him a lot. I know he respects me as a cricketer. I was more shocked than angry – bit disappointed, yes. It was more like, ‘are you sure about the move as Vijay hasn’t batted the whole tournament?’ I knew there must be a reason behind it.”

When asked about what was going through his mind when he walked out to bat, Dinesh replied, “I was just thinking to hit every ball for a boundary, as simple as that. There was nothing else you could do other than try to get a boundary off each ball. By the time I went in, we needed two big overs—there was no other way. Every ball had to matter at that stage.”

He further added, “I walked in and told Vijay to try to hit a boundary: That is instead of looking to hit a six, try and look to hit a four. My thinking was if he tried to get a boundary at that stage, he could hold his shape and not slog too much. Luckily, he got the crucial boundary in the 20th over.”

The reporter then asked Karthik to describe the way he faced the 19th over of Rubel Hossain. Decoding those six balls, Karthik said:

The previous game I played, he (Rubel Hossain) had bowled a yorker to me and the ball was also reversing. I knew that he will try a yorker again. I wanted to get under the ball so that I can get some elevation. So I stood ahead of the crease. Usually, I stay deep but I went forward this time—the idea was to try to connect with the ball as early as possible to get the elevation. And I hit it well over long on.

I just wanted to hit that ball in the gap; so I stood still, used my crease so that I could find the gap, and luckily the ball landed where I could hit it for four.

I knew he will try variations as all the balls he had bowled had a bit of pace. And it was the slower one but the pitch was not easy to bat, as I said. I tried to cut too hard but just couldn’t connect. The fifth ball, I tried to hit over extra cover and thought even if he bowls slow, I would be able to reach behind the ball and take some elevation but it didn’t go as well as I wanted.

As I said, I wanted to get a four off every ball and I didn’t try to hit big sixes. Finding gaps was more important. As I said, I have worked on how to use crease positions— Abhishek Nayar has been the sole man behind that development. I moved way down leg, probably last moment I knew he will try to bowl bit fuller at off-stump but soon I got into a position where I could scoop the ball. I guess I was one step ahead when it came to thinking.

In his previous interview, Karthik had said that Abhishek Nayar taught him how to make an apt use of the batting crease. Talking about him, the finisher said, “Yes, he was the one who taught me. He told me how to stay deep in the crease and use the speed of the ball. I was lacking those points. In the past, I would probably step out blindly. I think whatever little success I have had now, I owe it to Nayar. He didn’t have to do what he did for me. Why should he spend time with me? I haven’t given one rupee to him. What have I done for him? Nothing. He has helped me, been just giving me – knowledge, time, training tips, and he has done a lot for me.”

He further elaborated, “If I am where I am today, of course, family and close friends have played a big role, but as they say, Mata, pita, guru deivam— he has been my guru over the last few years and has taught me a lot of things. I owe everything to him. He never said no to anything that I have asked. He has always been there for me. I don’t know how many cricketers do what he does.”

Describing the planning for the last ball of the match when India needed 5 to win, Karthik said that he was only looking for a six. He hoped that Soumya Sarkar will go for a yorker and misses it. Dinesh reckons that the best part of the last ball was that Sarkar bowled it a bit wide, so he was able to apply his complete power to it and luckily it connected as well.

Karthik didn’t go for some extravagant celebration after hitting that big six as he feels that he is very shy and not the one who will express with anger or be very loud. He concluded by stating that how he managed to stay away from all sorts of media during tours. He said, “On tours, I try to stay away from social media or reading articles etc. It’s better to stay away from it, and focus on the process, the way I diet, I practice, and I prefer to stay on that path. I genuinely don’t know what people are thinking.” 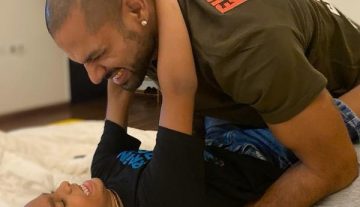