The Indian wicket-keeper batsman, Dinesh Karthik has been the talk of the town during the English summer with his commentary gig with Sky Sports. He did his first commentary stint during the ICC World Test Championship final at Southampton. After this, Karthik extended his time in England, as he was seen commentating in the inaugural season of the Hundred.

Currently, he has been seen in the ongoing five-match series between England and India five-match Test series.  So far, witty commentary of Karthik’s witty commentary and remarks have been hilarious, to say the least, and fans have totally enjoyed it.

The world saw a new side of Karthik, who had been around as long as anyone can remember. Apart from that, his social media jibes have also been loved by the fans. As India battled hard against England in the third Test at Headingley, Karthik put up a post on his Twitter which just summed up how all the Indian fans were feeling as he referred to the situation in which India are after the first three days of the Leeds Test.

Dinesh Karthik posted a picture of him and Michael Atherton commentating together, while Nasser Hussain was watching from the behind, smiling, almost grinning as the Indian batsmen were batting well. He tweeted, “Situation of Indian fans (@nassercricket) when they know @cheteshwar1 & @imVkohli are at the crease P.S. The admiration in Nasser’s eyes for the skill he sees in front of him is genuine.”

P.S. The admiration in Nasser's eyes for the skill he sees in front of him is genuine 😉#ENGvIND pic.twitter.com/yUXoQx4BFD

On day three of the Leeds Test, India came out to bat after restricting England for 432, with a first-innings lead of 354 runs. With a truck load of runs to be scored to save the match, India managed to end the day at 215 for 2 with Virat Kohli and Cheteshwar Pujara unbeaten on 45 and 91 respectively. The duo added 99 runs for the third wicket and looked in great touch.

ALSO READ: Jarvo has been banned for Life from Headingley Stadium

After this game, Dinesh Karthik will be traveling to the UAE to take part in the preparations of his IPL franchise, Kolkata Knight Riders (KKR). The second leg of the IPL 2021 is set to restart on September 19 and Karthik will be eyeing to get some practice before the tournament restarts. 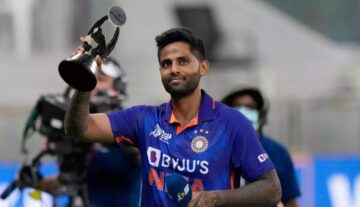 News
By SMCS - Sep 26, 2022
Suryakumar Yadav fights illness to play in the 3rd T20I against Australia