IPL 2017
These eleven Players could never acclimatise to the fast-paced Indian Premier League.
By CricShots - Apr 4, 2017 7:40 am
Views 0

Time flies, flies like a jet, sometimes making you wonder if you stayed in a different zone altogether. It’s difficult to believe it’s the tenth year of the IPL, incepted back in 2008. The tournament has seen tremendous success, has had its share of controversies. There have been intense moments; there have been grotesque moments and millions of memories. We have seen moments of brilliance, moments that have stopped us, held our breathes and made us drop our jaws. The IPL has been one hell of an extravaganza. The teams have evolved a lot over the years. They have grown smarter as well, from buying veterans and experienced players during the early years to preferring T20 specialists and young talents during recent times. It took some time for the teams to adapt to the then newly introduced format.

During the first few seasons, the teams preferred the big guns in the game. Many players who were specialists in tests and odis were bought by the teams.  A few of them managed to consolidate their techniques and adapt to the shortest format of the game and flourished, while the others couldn’t change their natural game and had to be dropped.

As a part of our special series to celebrate the tenth anniversary of the IPL, we take a look at eleven players who simply couldn’t manage to change their games to suit the IPL, and hence ended up failing miserably. We are sure a few names in the list will surprise you; a few will make you wonder how they even made it to the IPL!!!

The former Mumbai Ranji batsman was a part of the Royal Challengers Bangalore team in the inaugural edition of IPL.  Bought at an astronomical price of 150,000 USD, Jaffer played a total of 8 games for RCB. Being one of the most successful batsmen in Ranji trophy, Jaffer found it pretty hard to adapt to the game.

Jaffer represented RCB in two seasons. With a paltry batting average of 16.25, Jaffer was soon dropped from the side. After the 2009 season, he was released by the RCB.

A classical Test opener, Aakash Chopra joined Kolkata Knight Riders during IPL 1 and 2. Having a first-class strike rate of just above 50, Chopra was always going to be a misfit in the format, unless he radically changed his technique. He failed to do so! Result? Chopra had an extremely poor average of 8.83 in the 8 games he played.

In the 2nd edition of IPL which took place in South Africa, Chopra was sent back to India by KKR and was released from the squad.

In 2011 he joined the Rajasthan Royals side but didn’t play any games. The next time you watch Akash Chopra commentating in the IPL, you know he’ll be nostalgic, but alas, the memories won’t be beautiful.

One of India’s very very special batsmen, VVS Laxman was originally the icon player for Deccan Chargers. Laxman was bought by Deccan Chargers for USD 375,000 before he gave up the icon status so that the team could spend more on T20 specialists.

Laxman played a total of 17 games for DC before being released in 2010. In 2011 the newly formed franchise of Kochi Tuskers Kerala bought Laxman for USD 40,000. Laxman went on to play 3 games for KTK without .

In 2013, Laxman was named the mentor for the newly formed franchise Sunrisers Hyderabad.

Sarwan, one of the most dependable batsmen for West Indies during his era, was bought by Kings XI Punjab, during the first season of IPL for a price of USD 225,000. Sarwan played just 4 games in IPL, but it was enough to state that this format was completely alien for him.

The batsman with one of the most unconventional and unique techniques in the world, Chanderpaul was one of the most consistent batsmen in the longer formats of cricket. With an average of over 50 in tests, he certainly was a pillar of strength for the West Indian middle order. Considering this reputation, Royal Challengers Bangalore bought Chanderpaul for USD 200,000 in IPL-1.

With just 25 runs in 3 games for RCB, it was clear that T20 format wasn’t meant for him. He was eventually released by RCB after the 2008 season.

Tatenda Taibu has experienced everything, from a debut at an age of 18, to being the vice – captain at 19 and then being named the youngest captain for national side at 21. He later went on to announce retirement at the age of 22, courtesy the turmoil Zimbabwe Cricket was in, before coming back again at the age of 24. Taibu, a talented Wicket-Keeper batsman, became the first Zimbabwe cricketer to be a part of the IPL after Kolkata Knight Riders snapped him at a price of USD 125,000 in the first season of IPL.

Taibu found it pretty hard to adapt to the game and seldom got into the playing XI following poor performances and was eventually released after the first season.

The current Indian batting coach was a part of the Deccan Chargers team in IPL-1. The former Railways all-rounder was a regular member of the DC team. Even though he played 11 games for them, stats definitely suggest that Bangar found it hard to adapt to the game. He was released after the 2008 season.

In 2009 season of IPL, Bangar was acquired by Kolkata Knight Riders. Bangar just played 1 game for them, before being released midway through the season. Bangar recently returned to the IPL, this time though, as a coach and went on to write a tremendous success story with the Kings XI Punjab, helping them to reach the Final.

The former New Zealand all-rounder was a part of four IPL editions. During the first auction, Deccan Chargers booked the Kiwi for a price of USD 175,000. With a reputation of being an aggressive batsman and a handy medium pacer preceding him, Styris was expected to perform pretty well. But Styris failed to deliver, miserably. With a pretty poor batting average and a poor economy in bowling, Styris failed to get the playing time. In four editions that he was a part of, he only managed 12 games.

Sunil Joshi is probably only known for his spell of 5 for 6 against South Africa back in 1999. His reputation as a witty slow left-arm bowler and a host of good domestic performances earned him a contract with the Royal Challenger Bangalore for the first two seasons. Even though he was under contract till 2010, he was released early in 2009.

Joshi was never considered to be a T20 player. Also considering his age at that time, he was always a doubt for a long term career in IPL. In two years, he just played 4 games and was smashed at an economy of around 9 per over. Also with just 1 wicket to his name, Joshi never couldn’t adjust to the fast paced game. 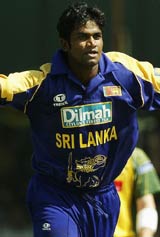 The left-arm pacer from Sri Lanka was picked by Deccan Chargers for USD 110,000 during the first auction. Zoysa, once the spearhead of the Sri Lankan bowling attack even for a brief period, was forced into early retirement because of injuries and inconsistent performances. With just 3 games for DC, Zoysa was released after 2008 season.

Hammered at 9 runs per over and a shameful bowling average of around 50, Zoysa was never a threatening customer in the IPL.

McGrath doesn’t need any special introduction. One of Australia’s most dominant pacers with 563 test wickets, McGrath certainly had many buyers, before Delhi Daredavils eventually landed a deal with him, for USD 350,000.

McGrath had a pretty good season for DD. With 12 wickets and a good economy, McGrath tasted success as Delhi’s pace spearhead. In 2009, though, McGrath was seen warming the benches. Later, he was released from the squad following which, he announced retirement from the IPL.