News
Elgar said the backroom noise is hampering the real exciting value of the Test series
By Sandy - Mar 20, 2018 9:02 am
Views 43

30-years old South African opening batsman Dean Elgar is feeling that the backroom noise is hampering the real exciting value of the ongoing Test series against Australia. From the very first Test of this series, controversies are continuously dominating over the exciting bat and ball fights on the field.

The ongoing four-match Test series between the hosts South Africa and Australia is currently standing in level by the 1-1 margin after the second game.

Talking about the ongoing Test series, Dean Elgar remarked an exciting series which is overshadowed by the controversies. Elgar said on that, “There’s been so much noise that people have actually forgotten there is such a great Test series happening between two strong and competitive teams. The backroom noise is hindering what has been quite an exciting Test series.”

Elgar further added, “I’ve been on the receiving end of it and I have also been one to give it out a bit, in all the right measurements.”

The third Test will begin on this Thursday at Cape Town. South Africa’s second Test match hero Kagiso Rabada’s fate will be decided soon. Due to achieving total nine demerit points in his account, Rabada has been suspended for the next two important Test matches.

However, he has challenged on that decision and the result will come out very soon.

Recently, another South African pacer Vernon Philander entered in the controversy list through a post on Twitter where the Australia captain Steven Smith was remarked “just as guilty” for that shoulder contact incident with Kagiso Rabada in the second Test.

Australian opener Cameron Bancroft recently reacted on that with a fresh warning as he said that they will use that for the sledging purpose.

Talking about that, Elgar quoted, “He will take it in his stride as Vern always does. He is quite a relaxed human being but on the field, he is as competitive as anyone else. He is going to expect that they will come out and say something to him.” 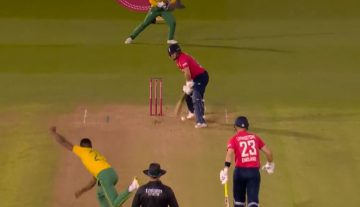