In recent times, a fan barging inside the field during a cricket match has become a trend and continuing the same, yet another fan managed to dodge the security at the Maharashtra Cricket Association Stadium in Pune, venue of the ongoing 2nd Test between India and South Africa, as he entered the playing field and as he tried to kiss the feet of the veteran Indian opener, Rohit Sharma and in the process tackling him too to the ground.

The incident took place during the 45th over of the innings on Day 3third day of the match and it has happened for the third time such during ongoing South Africa’s tour of India. It occurred when Vernon Philander had just walked in after the dismissal of Senuran Muthusamy off Ravindra Jadeja. But security guards somehow tackled the fan to the ground.

Another Test, another pitch invader!
This one made a beeline for @ImRo45 , and tried to kiss his feet…
Bizarre.
Pune cops far more alert than Visakhapatnam, mind you…
Taken him down the tunnel that leads to the kennels 👀#IndvSA pic.twitter.com/VdEmEoYszd

The fan sprinted towards the slip cordon where Rohit was standing. While Indian players including the skipper, Virat Kohli, his deputy Ajinkya Rahane and the all-rounder, Ravindra Jadeja saw the funnier side to it, batting legend Sunil Gavaskar criticized the security for letting that happen.

While commentating on-air, Gavaskar said, “Security not there to watch the match for free. This is a perennial problem in India.”

This is not the first time a fan has invaded the pitch during the ongoing series. In Vizag, venue of the first Test, a fan shook Kohli’s hand before attempting to take a selfie with the on-field India cricketers. During the 2nd T20I between India and South Africa in Mohali, twice the match was interrupted due to fans making their way onto the field.\

Gavaskar further added, “It’s a serious security issue. Not just a question of a fan going to meet a cricketer. They have to make sure nobody enters the ground. Anything could happen. Why take a chance? It’s not easy to get inside the field. So what are they (security) doing?” 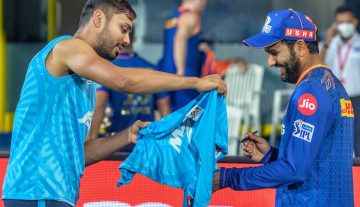