The Indian Premier League (IPL) franchise, Royal Challengers Bangalore (RCB) have never won the title in the history of the cash-rich league but it is fair to say that they are one of the most followed franchises in the IPL. Under the leadership of Virat Kohli, the team has never been short of stalwarts over the years but the franchise has failed to get over the line in crunch situations.

Since finishing as the runners-up in the 2016 edition, the Bangalore-based franchise has finished with a wooden spoon twice in the past three editions. But that hasn’t fazed RCB one bit. After having taken down their profile pictures and photos from their Facebook, Twitter and Instagram accounts, a lot of people from the cricketing fraternity were worried as to what was going on with the franchise social media handles.

But, it seems like RCB is bracing for a new decade with a new logo. The franchise had hyped up the drama in the past few days with the likes of Virat Kohli, Mike Hesson, Yuzvendra Chahal and AB de Villiers wondering where the profile pictures and all the photos from their social media accounts disappear.

The mystery was finally unveiled on Friday when RCB unveiled its newly designed logo. Captioning the same on Twitter, RCB wrote: “New Decade, New RCB, and this is our new logo #PlayBold.”

Embodying the bold pride and the challenger spirit, we have unleashed the rampant lion returning him to the Royal lineage.

After Bangalore based franchise released its new logo for the upcoming edition they received quite a mixed reaction from the fans. However, Virat Kohli, who is currently on a tour to New Zealand, took to his Twitter handle and showed his support for the newly-introduced logo of the Bangalore-based franchise.

He tweeted: “LOGO ka kaam hai Kehna. Thrilled to see our new RCB tweets logo. It embodies the Bold pride and challenger spirit that our players bring to the field. Can’t wait for #IPL2020 #NewDecadeNewRCB.”

LOGO ka kaam hai kehna. 😄 Thrilled to see our new @rcbtweets logo. It embodies the Bold pride and challenger spirit that our players bring to the field. Can’t wait for #IPL2020 #NewDecadeNewRCB 🤩 https://t.co/n8c24JqbAl

That said the new logo that the RCB unveiled on Friday has not gone down well with the fans. While some alleged that they have copied the logo while others hilariously trolled them, asking them to change the players not their logo.

😂😂😂😂😂😂😂😂😂😂😂 If you are in Hyderabad there is a famous club called Secunderabad Club, RCB copied its logo right off it, no wonder I call Bangalore our extended city. pic.twitter.com/iSS8iIb0wW

April : Awwww, so cute to see Virat and AB together. RCBian 4 lyf ❤️❤️

May : If DC beat RR, MI beat CSK, KXIP beat SRH and KKR lose all their matches then we can qualify https://t.co/uRsCJhIRDc

THIS IS IT. The moment you've been waiting for. New Decade, New RCB, New Logo! #PlayBold pic.twitter.com/miROfcrpvo

RCB is changing logo thinking that it will improve their performance, this is what happens when the captain outsources idea from Bollywood. 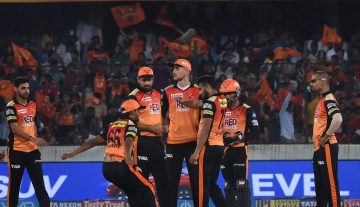