Sarfaraz Ahmed has been sacked from the captaincy of Pakistan’s Test and Twenty20 International (T20I) teams, the Pakistan Cricket Board (PCB) shared in a press release on Friday. Azhar Ali named as Test captain whereas Babar Azam will lead the T20I side in the upcoming series. Sarfaraz Ahmed’s captaincy was doubted as Pakistan had a dismal show in the ICC World Cup earlier this year. However, Twitterati reacted on PCB’s decision.

Azhar ali out from cricket quite some time & appoint as captain look at his analysis for last 5 matches .shame on pcb , no karachii player in cricket team . First appoint misbah & waqar & after that their selected captain , this is how punjab courrept board work .

It's a bias decision , why Azhar ali appoint as test captain courrept decision .it's a punjab cricket board .

Azhar Ali bad decision.. Babar Azam should be caption in All format 👍👍👍

Sarfaraz has been made the Scapegoat for the Failure of our Batsmen/Team for last few years,including Babar in T-20 format.When there was pressure on Babar he could not perform against SL!The pressure will be much more on Babar & Azhar to Perform Like Before & Win Matches Too!

Pakistan was whitewashed at home against Sri Lanka. But despite that loss, Sarfaraz Ahmed’s exclusion will come as a shock to the fans. The wicketkeeper-batsman had led Pakistan to the top spot in T20I rankings and has won 11 series at a row. Sarfaraz Ahmed also topped the batting list with 67 runs across the series.

“My good wishes are with Azhar Ali, Babar Azam and the Pakistan cricket team, and I hope they will continue to grow stronger and stronger,” said Sarfaraz Ahmed.

“There is no bigger honour than to captain the Pakistan national cricket team in the pinnacle format of the game. I feel humbled, excited and privileged, and with the support of the team, look forward to justifying the faith that has been entrusted upon me for the World Test Championship,” Azhar Ali, the new Test captain said in a PCB press release.

“Sarfaraz Ahmed has done an excellent job in transforming raw talent into experienced players and I now look forward to inspiring those skillful players in our endeavours to collectively achieve our World Test Championship objectives and beyond. These are exciting times in Pakistan cricket with a new team management. As a captain, I feel comfortable that there will be number of knowledgeable people in the hut who I can rely for advice and guidance,” Azhar further added. 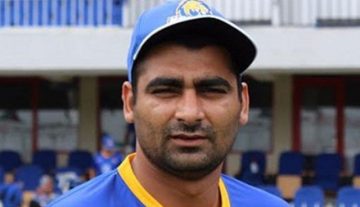