Former England all-rounder, Andrew Flintoff, never fails to amazes the audience with his performance. Be it on the field or off it, Freddie has his own ways to impress people.

Having played for England last in 2009, Flintoff was commentating in this season of the Natwest T20 Blast. The England legend dressed up as Elvis Presley to serenade the crowd alongside David ‘Bumble’ Lloyd, who was cast as Johnny Cash.

Bumble sang Cash’s ‘Folsom Prison Blues’ before Flintoff gave a rendition of ‘Suspicious Minds’. Both of them enjoyed their new role and were certainly looking impressive on screen.

It was just then that Flintoff, while walking backwards filming himself on a camera with a selfie stick, fell over a speaker.

The audience cheered Flintoff as he got up quickly and covered the whole incident well, albeit, without a wig. 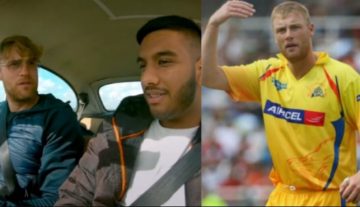 Videos
By CricShots - Dec 15, 2021
Andrew Flintoff Suprised A Fan By Revealing He Played In IPL For CSK