Former cricketer Bishan Singh Bedi has slammed the Feroz Shah Kotla pitch by saying “poorly kept”; where the final, as well as decider One Day International match, is going on between India and Australia. After having lost both the Twenty20 International matches, India has bounced back really well. They claimed easy victories in the first matches by six wickets and eight runs respectively. On the other hand, Australia too was trying their best to get back in the winning seat. However, they played brilliantly in the next two matches and registered victories by thirty-two runs and four wickets respectively. Hence, the final of the five-match ODI series is currently going on in Delhi.

However, the last match was seen a huge amount of runs from both sides; where India scored 358 runs in their allotted overs and Australia chased down within 48 overs, scoring 359. But if people will expect the same on the pitch at the Feroz Shah Kotla in New Delhi, then they will be disappointed.

Meanwhile, the pitch which former India captain Bishan Singh Bedi was looking for, that didn’t fit according to his wish. The left-arm spinner, who has 266 wickets in his name from 67 Tests, thinks the pitch of the Feroz Shah Kotla has been “poorly kept”

However, he felt that some “cosmetic” treatment was needed and he expressed his thoughts on Twitter.

“Playing surface at Kotla looks overused and yet not much domestic cricket has been played there. Even the rest of the square looks poorly kept. For this game, at least some ‘cosmetic’ treatment could have been provided to the entire square for it to appear nice & green to the ‘eye’,” Bishan Singh Bedi tweeted on Wednesday.

The team who bat first on the pitch will be on the safer side as the team who will bat later, might face the dew factor in the evening.

“Very little lateral movement on offer off the wicket, and the bounce will be a little low, so the average score is very low – about 220-230. The dew can have an effect later, there will be a little bit of spin with the grip on offer, but not enough to intimidate the batsmen,” former India player Sunil Gavaskar said about the pitch while he was expressing his thoughts.

However, Australia has won the toss and elected to bat first. It seems that the tourists have a clear idea about the pitch.

“Looks like a dry wicket. Hopefully, we can get a big score and defend it later. The wicket and the squares have been re-laid over the last few years, so we can’t look into the numbers much. Not a lot of international cricket here over the last 10 years,” Australia captain Aaron Finch said during the toss.

On the other hand, Virat Kohli, India captain, too would choose to bat first if he would win the toss.

“We would have batted first. Hopefully, it doesn’t break down too much (the pitch) and hopefully there’s no dew in the second half as well,” said Virat Kohli. 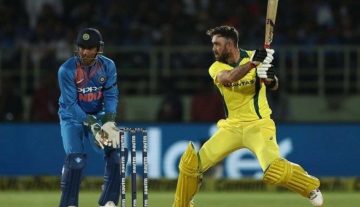