The young Indian chinaman bowler, Kuldeep Yadav has been touted to become India’s crucial cog for the upcoming World Cup and he has often seen proving his worth. During the series-decider against Australia at the Feroz Shah Kotla in Delhi he got the crucial wicket of Ashton Turner, who snatched the game away from the hosts in Mohali.

Earlier, in the game, Finch had won the toss and elected to bat first on the pitch which was looking a decent one for the batsmen. However, India made some surprising changes in the squad as KL Rahul and Yuzvendra Chahal were replied by Jadeja and Mohammed Shami. On the other hand, Australia replaced Shaun Marsh and Jason Behrendroff with Marcus Stoinis and Nathan Lyon.

Australia had a decent start to their innings as they were standing at 76 without loss after the 14-over mark. Then came Jadeja for the bowling the 15th over of the game and he got the breakthrough for the hosts by dismissing Finch. However, after that dismissal, Peter Handscomb and Usman Khawaja again started to build a partnership which was broken in the 33rd over, but only after latter scoring his 2nd ODI century.

WATCH – Jadeja Cleaned Up Aaron Finch With A Dream Ball

However, in the 42nd over of the game, Turner smashed Kuldeep for a six on the very first ball. Yadav delivered a short ball, and Turner made no mistake in picking the length only to clobber it to deep midwicket for a huge six. Kuldeep took revenge on the very next ball as despite the fact that Turner read the wrong’un but hits against the turn in trying to loft this over long-on and it is well taken by Ravindra Jadeja. 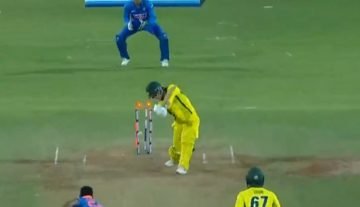