Former India opener Gautam Gambhir recently came up with a bold comment regarding the Royal Challengers Bangalore skipper Virat Kohli. Gambhir said that Kohli should consider himself lucky fo retaining the captaincy for the RCB. And while Gambhir’s comment might be considered bold, Kohli’s track record as captain does not contradict it much.

Kohli got the captaincy of the franchise in 2013 after the retirement of Daniel Vettori, but the team is yet to win an IPL trophy. In fact, the Bangalore-based outfit is one of the most inconsistent teams in the tournament. Ever since Kohli took charge, they made it to the playoffs just once when in 2016 their skipper scored nearly 1,000 runs and led the team to the final.

The performance of the team last year was equally forgetful. Despite having the stalwarts like Kohli, De Villiers, Brendon McCullum, Quinton de Kock, Chris Woakes and other big names, they finished sixth in the eight-team competition. Recently, Kohli acknowledged that not luck but bad decisions were the reasons behind the team’s woes. Gambhir then criticized Virat by saying that the latter is not a ‘tactful captain’.

Recently, during a show on Star Sports, Gambhir said, “I don’t see him as a tactful captain (tactician). And he hasn’t won the IPL. So ultimately, a captain is only as good as his record. There are people who have won the trophy three times. MS Dhoni and Rohit Sharma. You cannot compare him to someone like Rohit or Dhoni at this stage. He has been a part of RCB and captaining RCB for the last seven to eight years, and he has been very lucky and should be thanking the franchise that they stuck with him. Because not many captains have got such a long rope where they haven’t won a tournament.”

However, former India skipper Sourav Ganguly has a contradictory opinion to Gambhir while refusing to doubt Kohli’s captaincy. The legendary skipper also backed Kohli to produce a turnaround soon.

Ganguly said, “If you talk about Virat Kohli and keeping him as a captain, just look at what he has done. What he has done with the bat in every format of the game. Absolute champion. And he deserves to be captain of RCB for whatever period of time. I am sure he will turn it around.”

The Royal Challengers will start their campaign against defending champions Chennai Super Kings on March 23. 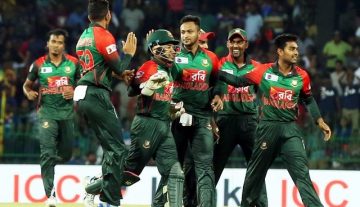 Article
By Shruti - Oct 29, 2019
India vs Bangladesh 1st T20I To Be Held As Per the Plan Despite Poor Air Quality