Former Indian skipper, MS Dhoni is certainly one of the most loved and followed cricketers in India. On multiple occasions, it has been seen his fans have tried to invade into the cricket field to have a closer glimpse of their hero. Something similar happened in the second ODI against Australia in Nagpur. Right before the start of the second innings when the Indian players walked on to the field, a fan ran behind MS Dhoni.

Dhoni who is known for his street smartness also has a lighter side to him. On this occasion, MS tried to run away from the pitch invader (fan). However, the fan didn’t budge as he chased the former skipper and eventually got to hug Dhoni. The entire nation was left in splits after the incident.

Cricket is treated as a religion in India and the fans treat the cricketers as superior powers and simply wait to have a glimpse of them. Former Australian cricketer Matthew Hayden expressed his amusement to see the fan invade the pitch and reach the 37-year-old MS Dhoni. He asked former India skipper Sunil Gavaskar about the security to which Gavaskar gave a funny reply.

Hayden asked, “Where was the security, Sunny?” and Gavaskar replied, “They are watching the match and therefore were not able to stop these invasions. In Australia, South Africa, and England, the security guys are sitting with their back towards the game and watching the crowd.”

The Indian skipper, Virat Kohli had a fabulous game as he scored his 40th ODI ton and he is now only nine away from equalling Sachin Tendulkar’s record of 49 ODI hundreds. His 116 helped India get to 250 in the first innings. A collective effort from the bowlers helped India win the game by 8 runs.

While Kohli expressed his satisfaction in the post-match presentation, he also took to Twitter to express his happiness. He put up three pictures and captioned it “Stellar performances, exceptional teamwork!” 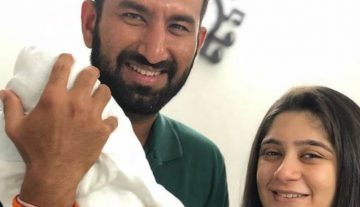