George Bailey had only featured in a single game for the World Cup winners Australia during the 2015 World Cup. In a recent interview with a podcast channel, Tasmanian reveals how his idea worked wonders for the Australian team and helped them win the World Cup. George Bailey said that he was the one who put forth the idea of promoting Steve Smith up the order. The right-handed batsman said that he believed in Steve Smith’s potential of building up an innings. Before the 2015 World Cup Steve Smith used to bat in the lower middle order for hosts’ Australia. Bailey says that Smith’s changing of slots has helped the Australian Cricket team to a great extent.

Steve Smith had an excellent outing during the 2015 World Cup,. Living upto Bailey’s thought, the star batsman scored 402 runs in the 8 games he played for the Aussies. Smith was also Australia’s leading run-scorer in the tournament and averaged 67 runs. His knocks included a century and four half-centuries.  The middle-order batsman also felt that all-rounder Mitchell Marsh could be pushed down the batting order in remarks to the players’ power-hitting skills that might come in handy during the final overs on the team’s innings.

The Unplayable Podcast quoted Bailey saying,  “My claim to fame, and no doubt he would have ended up there anyway, (but) we’d been using Steve Smith at six or seven in the one-day team and in Zimbabwe (the previous August-September) we threw Mitch Marsh up to three in a game.”

“I made a suggestion that it should be Steve Smith (at three) because at that time Mitch could, and still can, bludgeon the ball, but I couldn’t see him batting for the full innings, where I could see ‘Smudger’ (Smith) batting for 50 overs, making those key hundreds that you could bat around. That recommendation was taken up and that played a huge part – Smudger was three right throughout the World Cup and hasn’t moved since,” Bailey said.

George Bailey played his only game of the tournament when he came in as a middle-order replacement of then skipper Michael Clarke. The only game he played of the ICC World Cup 2015 came against arch-rivals England at the Melbourne Cricket Ground. The middle-order batsman waled straight right into the team racking up a half-century and scoring 55 runs during his stay at the crease. However, with captain Micheal Clarke recovering from the hamstring injury,  the Tasmanian was again left out of the playing 11 by the Australian team management. 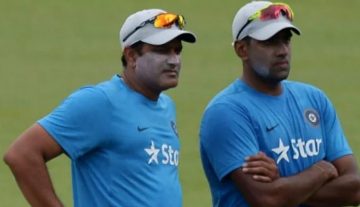