Ahead of the IPL 2021, there have been a plethora of discussions regarding the expectations from the Australian all-rounder Glenn Maxwell. His big-hitting abilities are second to none, but he has always been inconsistent whenever it comes to the Indian Premier League. But just a few days away from the opening match against the defending champions Mumbai Indians (MI), Maxwell believes that his performance will do the talking in the 14th edition of the cash0rich league.

Glenn Maxwell also reckons that he will like to assist the Royal Challengers Bangalore (RCB) skipper Virat Kohli with his leadership abilities and his experience of the game. In an interview posted by RCB, Maxwell said, “I think my performances will take care of themselves. I want to have a positive influence on everything I do, be it attitude, helping out around the team, leadership wise helping out Virat when he needs it.”

ALSO READ: Gautam Gambhir Opens Up On The Inconsistency Of Glenn Maxwell In IPL

He further added, “I suppose with my experience, I think it’s my 22nd trip to India… so with that sort of experience you have got to help out the rest of the group.”

RCB looking for its maiden IPL title, and they bought the services of Maxwell for as many as  ₹14.25 crores. The big-hitting Australian all-rounder managed only 108 runs in 13 matches for Punjab Kings last season, but now he is looking forward to playing with legends of the game such as Virat Kohli and AB de Villiers.

Talking about the same, Glenn Maxwell said, “It’s been a long time (dream of playing alongside Kohli and de Villiers). Obviously having known them very well off the field, played against them a fair bit but finally, I got to play in the same team.”

Maxwell also added that it was tough on the players to switch from one bio-bubble to another and said that it felt like a ‘never-ending nightmare’.

Talking about the bio-bubble life, Glenn Maxwell said, “It’s very difficult (to move from one bubble to other)…you being sheltered from people outside your bio-secure bubble and you get stuck into this never-ending nightmare where you are living the same day over and over again. But it’s great to be back playing and to be able to do our jobs and entertain people. But it’s still a difficult lifestyle at the moment.” 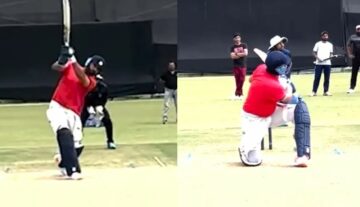