Australia’s limited-overs tour of England will be played in bio-secure venues, as confirmed by the officials said Friday after its players were given government clearance to travel. The confirmation ensures Australians will be getting back to the fielding after a gap of almost nearly six months, with Glenn Maxwell, Nathan Lyon, and Marcus Stoinis recalled to the squad, while Usman Khawaja and Travis Head missed out.

Ahead of the postponed the limited-overs series, the Aussies have also agreed to self-quarantine for 14 days on their return. They will be departin from Perth on August 23 en route to Derby ahead of four practice matches – three T20s and a one-dayer – before three T20Is and three ODIs in Southampton and Old Trafford, which have hotels on site.

Explaining the same, Cricket Australai;’s interim CEO, Nick Hockley said, “We are very excited to be heading to England and to get back into the international fray. We congratulate the England Cricket Board on leading the resumption of the game in a way that places the health and safety of players and staff at its core.”

Hockley’s ECB counterpart Tom Harrison said Australia was owed “a significant debt of gratitude” for making sure the tour went ahead.

Harrison said, “Their cooperation to ensure these matches are staged is crucial to cricket in this country. It will also provide much-needed financial aid at all levels of cricket in England and Wales as we work through the challenges in front of us.”

Australia finalized the 21-man squad with Maxwell, Lyon and Stoinis among notable inclusions, along with three potential debutants – Josh Philippe, Daniel Sams and Riley Meredith. But  Head, Khawaja, Michael Neser, Ben McDermott or D’Arcy Short failed to make the despite being named in the reliminary 26-man squad last month.

Talking about the team selection, coachn, JustinLanger said, “I am delighted with how the players have returned to their states from the break back in March. The whole squad has come back fitter and stronger, which is great testament to each of them. We have a massive assignment ahead with World Cups, Test series against India and South Africa and the Ashes next year. We can’t wait to get back into it again.” 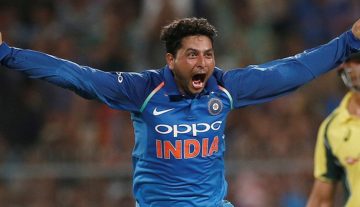 News
By Sandy - Mar 14, 2018
Kuldeep Yadav was nervous before the South Africa tour but now he is ready for the overseas Test cricket