Zimbabwe skipper, Hamilton Masakadza got overboard with his emotions when he announced that Friday’s match against Afghanistan would be his last international game to his teammates. He received a guard of honor by both the teams after he smashed 71 off 42 balls to take Zimbabwe to an impressive seven-wicket victory. He decided to call it a day on his 18-year international career with a blistering five sixes and four fours.

While announcing his retirement, Hamilton said, “Obviously it was super special. To lead the team to the win was really special. I started tearing a little bit in the morning trying to get through the team talk with the boys. I am not someone who wears his heart on his sleeve but I think this is the one thing that brought a few emotions out of me. Even when I tried to tell the guys and the team before I made the official announcement, I barely got through three sentences so it’s been a really emotional time for me.”

ALSO READ: Hasan Ali Ruled Out Of Pakistan Squad Due To Back Spasm

Masakadza created a world record when he became the youngest Test century scorer at 17 years and 254 days. His record survived barely three months before being broken by Bangladesh’s Mohammad Ashraful. He was also Zimbabwe’s first black player to score a first-class century.

Hamilton later took a three-year sabbatical from international cricket to pursue studies and returned with the national team in turmoil over player disputes with the national organization. The troubles had some serious effects on his career as after that he had to wait until 2011 to score his second Test century, against Bangladesh, after Zimbabwe ended a five-year self-exile from Test cricket.

Masakadza, who played 38 Tests, 209 ODIs and 66 T20Is said he was leaving with no bitterness. He said, “I have been going through a lot of emotions today, but regret is not one of them. I am really thankful, thankful to the board for giving me the chance to play as long as I have.”

Friday’s game was Zimbabwe’s last in the three-nation series. Bangladesh will play Afghanistan in the final on Tuesday. 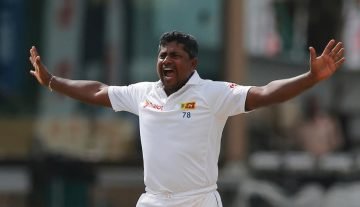 News
By CricShots - Oct 22, 2018
Rangana Herath Announces The Date Of His Retirement