The veteran Indian Off-spinner, Harbhajan Singh reckons that the India team management will be going with Kuldeep Yadav over Ravindra Jadeja or Ravichandran Ashwin for the upcoming first Test against Australia in Adelaide on December 17. Kuldeep picked up a five-wicket haul in his last Test India locked horns with Australia at the Sydney Cricket Ground in January 2019.

Team India head coach Ravi Shastri at the time had expressed full faith in the chinaman, saying that Kuldeep would be their first-choice spinner in overseas Tests. Nearly a couple of years after Shastri’s statement, Kuldeep has gone down the pecking order. His stats in white-ball cricket have also been going down in over a year which has led to him being in and out of the Indian teams which is why Harbhajan is sure India won’t be looking at the 25-year-old for the day-night Test at the Adelaide Oval.

Harbhajan explained, “When we talk about confidence, Kuldeep hasn’t played a lot of cricket since the 2019 World Cup in England. Even in IPL 2020, he played a handful of games only. It depends on the team management on how they handle him, and how they can get the best out of him.”

He further added, “The last time he played a Test in Australia, Ravi Shastri had said that Kuldeep would be the best choice for the Test side on overseas pitches. We will have to wait and see if Shastri sticks by his statement on Kuldeep. But looking at his confidence right now, I don’t think India will pick Kuldeep in the 1st Test, they will either go with Ravindra Jadeja or Ravichandran Ashwin.”

India currently holds the Border-Gavaskar Trophy after their 2-1 win over Australia in the 2018-19 Test series Down Under. The 4-match series this year will get underway with the Pink-Ball Test on December 17. 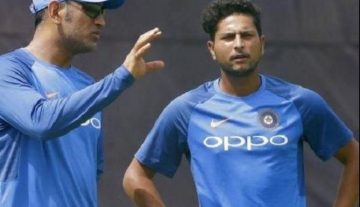 Social Shots
By CricShots - May 16, 2019
Kuldeep Yadav Denies The Rumors After His Statement On MS Dhoni