The veteran Indian cricketers, Yuvraj Singh and Harbhajan Singh’s camaraderie on and off the field have often been seen giving friendship goals to other professional cricketers. However, the duo has not been able to play for the same team for some time now and now that Yuvraj has hanged his boots, the prospect is effectively done and dusted.

It hasn’t stopped Yuvraj and Harbhajan from taking a some digs at each other for their social posts, which serves as a great source of entertainment for their fans.

On Thursday, when the veteran southpaw went on to share a split image of his present self and as a young kid on Instagram, Harbhajan couldn’t keep himself from posting a funny comment.

Yuvraj, in his post, compared both of his pictures and wrote that despite so many years the only thing that has changed is his beard. However, Harbhajan had a different angle to while seeing the picture and posted a cheeky comment.

Yuvraj had captioned the post as: “Well nothing much seems to have changed except the beard! Same innocence on the face and decent looks too. What do you feel?” To which Harbhajan commented: “R u sure paji just the beard??”.

Harbhajan had posted a similar split image of himself from two different eras — 1996-97 and 2019-20. Captioning the picture in Instagram, he wrote: “Take time to be thankful for everything that you have.. you can always have more, but you could also have less”.

Harbhajan can be expected to get back on the field while playing for three-time champion Chennai Super Kings (CSK) in the 13th edition of the Indian Premier League (IPL), which is scheduled to start on September 19 in the United Arab Emirates (UAE). 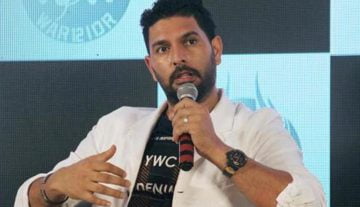 Twitter Reaction
By CricShots - Dec 12, 2019
Yuvraj Singh Gets A Plethora Of Wishes Of His 38th Birthday