India is on the Europe tour and they will be facing Ireland for a 2-match T20I series, and the final game of the series has been played at Castle Avenue in Dublin. Harshal Patel managed to beat Lorcan Tucker in the second innings and Ishan Kishan along with the bowler convinced the Indian skipper, Hardik Pandya to go for the DRS call, but it eventually got wasted.

After winning the first T20I and having an unassailable lead of 1-0 in the series, India started well in the second match even before the start of the play. As the coin toss was flicked in the air, it produced results in favor of Hardik Pandya. With Ruturaj Gaikwad resting due to injury, Ishan Kishan and Sanju Samson opened the innings.

WATCH – Ishan Kishan Trolls The Batter Before Stumping, But It Was A No-ball

India posted a total of 225/7 owing to a brilliant century from Deepak Hooda. Ireland attacked right from the start and they have maintained a run rate of more than 10 runs per over for a major part of the innings so far.

A remarkable incident took place in the first half of the second innings including Hardik Pandya, Harshal Patel, Lorcan Tucker, and Ishan Kishan. Tucker pressed forward to check a drive, but Harshal Patel beat him with the slower ball and it crashed onto his pads. As the batter decided to steal single, Ishan Kishan attempted a throw but missed the stumps, otherwise, Tucker could’ve been out.

However, Harshal and Ishan convinced Hardik Pandya to take the DRS call for the lbw after the umpire ignored their appeal. In the replays it was clearly visible that the impact was outside off stump, and hence, the Indian skipper instinctively cussed at Ishan and Harshal as the DRS was wasted.

Pandya abused both Harshal and kishan for convincing him take the review😂😂😂 #INDvsIRE pic.twitter.com/eC5XA7vGAc 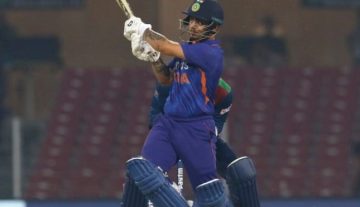