India is on the Europe tour and they will be facing Ireland for a 2-match T20I series, and the final game of the series has been played at Castle Avenue in Dublin. Ravi Bishnoi stumped out Andrew Balbirnie in the second innings and Ishan Kishan mocked him before whipping the bails off but his antics turned out to be useless as the bowler had overstepped.

After winning the first T20I and having an unassailable lead of 1-0 in the series, India started well in the second match even before the start of the play. As the coin toss was flicked in the air, it produced results in favor of Hardik Pandya. With Ruturaj Gaikwad resting due to injury, Ishan Kishan and Sanju Samson opened the innings.

India posted a total of 225/7 owing to a brilliant century from Deepak Hooda. Ireland attacked right from the start and they have maintained a run rate of more than 10 runs per over for a major part of the innings so far.

A remarkable incident occurred in the first half of the second innings including Andrew Balbirnie and Ishan Kishan. Ravi Bishnoi was bowling the eighth over of the innings. He bowled a googly on the fourth ball and Balbirnie came down the track to tonk the ball towards the boundary line.

However, he was deceived in flight and was caught short of the crease by Wicketkeeper Ishan Kishan. Kishan paused for the stumping and mocked the batter. Indian team thought that they had taken the crucial wicket but TV replays showed that he had overstepped and umpire signaled a no-ball as a result.

Poor from @ishankishan51. There in no need to tease someone in this sport. Ireland could have teased him when he got out for not so much earlier today. #IREvsIND #CricketTwitter

Really @ishankishan51 ! Showmanship against Ireland! We have a word for that in Hindi- "kaabil". Come on man! Show some decency! #IREvIND

That’s what you get for not showing an iota of respect to the opposition @ishankishan51 . Karma in your face, T20 quick. #IREvIND

Balbirnie has the last laugh it seems. Poor Ishan Kishan.

#IREvIND
You also feel embarrassed because of Ishan kishan 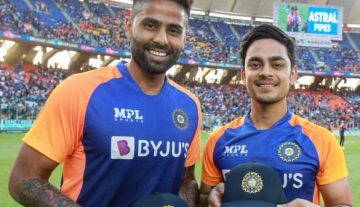