After leveling the three-match series in Auckland by 1-1 against New Zealand, Team India will be looking maintain their unbeaten record in a three-match series at the Seddon Park in Hamilton. After winning the toss, the Indian skipper, Rohit Sharma decided to bowl first in a series decider. India made only one change as Yuzvendra Chahal made way for Kuldeep Yadav. However, it was an unlucky day on the field for the flamboyant Indian all-rounder Pandya.

The situation was quite similar to the first game in Wellington as the Kiwis were cruising at 66/0 after the first six overs with both the Kiwi openers Tim Siefert (43) and Colin Munro (72) smashing all the Indian bowlers. Munro was lucky as he was dropped twice during his breathtaking 40-ball 76 in Hamilton. It was Hardik who finally took the catch, safe as a house, to send the fiery batsman packing.

PandyaPandya was over the moon after taking the catch as he realized the importance of the wicket. Earlier, Khaleel dropped a sitter of Munro off the bowling of Hardik. It is a batting paradise at Hamilton and a big total is on the cards, and hence Munro’s wicket could have made a difference of maybe 15-20 runs to the final total.

Here is the dismissal and Pandya’s reaction after taking the catch:

And here is when Khaleel dropped a sitter off the bowling of Hardik:

New Zeland finished the game with the tally of 212/4 in their quota of 20 overs. Munro was the highest run scorer for them as he stitched a partnership of 80 runs for the opening wickets for New Zealand with Seifert. From the Indian side, Kuldeep was the pick of the bowlers as he finished the innings with the figures of 2/26 in his quota of 4 overs. Kunal Pandya conceded 54 runs in their quota of 4 overs without taking a wicket. 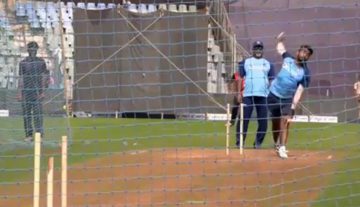