England and Pakistan are locking horns with each other in the third game of the seven-match series at the National Stadium in Karachi. The Pakistan pacer, Haris Rauf bowled a bouncer during the third T20 match and the ball got stuck in the helmet grill of Harry Brook and almost all the players had a laugh on the field.

England has set a target of 223 runs to Pakistan in the third T20 match. In the 17th over of the innings, Harry Brook escaped Haris Rauf’s dangerous bouncer and the ball went straight into his helmet. Fortunately, he was not injured, and later fast bowler and wicketkeeper Rizwan inquired about his well-being.

It was a scary moment in the middle as the bouncer from Haris Rauf got stuck in the helmet grill. An inch more and Brook could’ve suffered a serious injury. Seeing the ball get stuck in the batter’s helmet, Rauf wasted in no time rushing to Brook to ensure that the Englishman was ok.

Pakistan Cricket shared the video of the incident on social media: “Caught in the grille.” “Brook gets a hug from Rauf after the sharp bouncer.”

Smiles all around 😁#PAKvENG pic.twitter.com/66rQ9Z8Cd4

Harry Brook was sensational with the bat for England as he played a match-winning knock of 35-ball 81 to fire the team to a total of 221 runs in 20 overs. Ben Duckett (70 off 42) and Will Jacks (40 of 22) also gave important contributions. Brook was also named the Player of the Match for his stupendous knock.

Chasing the target, Pakistan was restricted to 158/8, with Shan Masood being the hosts’ top-scoring batter (66 runs off 40 balls). With the win, England has taken the lead in the 7-match series again, with a scoreline of 2-1 after 3 matches. 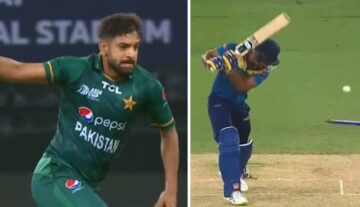