The India women’s cricket team skipper, Harmanpreet Kaur, has shared her eagerness to ply her trade in the upcoming Women’s IPL scheduled to be commencing in March, a month earlier than the men’s IPL. The BCCI has already sold the media rights of the WIPL to Viacom 18 for ₹ 950 cr.

The inaugural edition of the Women’s IPL will be featuring five teams but the franchise names for the league will be announced on January 25, after a closed bidding process. As the preparations are in full swing for the tournament, team India skipper Harmanpreet Kaur appreciated BCCI’s efforts.

Sharing her opinion ahead of the T20I series opener against South Africa, during a media interaction, Harmanpret Kaur said, “Many girls all over the world will play. Because the opportunity that the next generation will get is something many old cricketers have missed.”

Harmanpreet Kaur continued by saying, “Everyone is happy about this and we are waiting for it to start. Personally, for me, it will be a big achievement to participate in that. There can be no bigger achievement for women’s cricket than this. This is a big step and all women cricketers were waiting for this opportunity for a long time.”

🗣️🗣️ It is a great initiative by BCCI and everybody is waiting for the Women’s IPL to start; it will take women's cricket forward. #TeamIndia captain @ImHarmanpreet speaks about the upcoming inaugural edition of the Women's IPL ahead of the Tri-Series in South Africa. pic.twitter.com/nqdNFKxxjA

The Indian skipper concluded by saying, “And finally the time has come. The amount of response we are getting from everyone is outstanding. That was the reason we wanted to express our feelings on social media.”

ALSO READ: Virat Kohli Praises For Cristiano Ronaldo After His Performance Against PSG

India’s women’s cricketers have already participated in franchise cricket. Several big names have experience playing WBBL as well as The Hundred. This will help the players to comfortably mold into the requirements of franchise cricket making WIPL much more interesting. 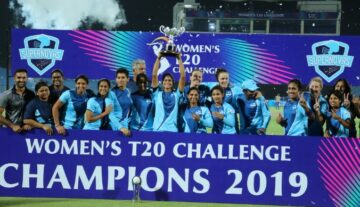