Tottenham Hotspur striker Harry Kane was seen at a game of cricket at the hallowed Lord’s and enjoyed a gala time at as he performed the toss for The Hundred clash between London Spirit and Manchester Originals. Later on, he was also seen taking part in a six-hitting challenge and also performed commentary duties alongside former Indian head coach, Ravi Shastri.

Harry Kane had the company of his Spurs teammate Matt Doherty as the two took part in the six-hitting challenge against each other ahead of the match. Doherty fared better than Kane as he managed to hit the ball long and hard. Expectedly, both the footballers sported Spirit jerseys to make it clear where their loyalties are.

Kane is counted among the world’s most prolific strikers and is second on the list of England’s all-time goal-scorers. He has so far scored 50 goals in 71 matches for England.

For his club, Harry Kane has smashed as many as 183 goals and as of now is the fifth most prolific striker in the Premier League’s history. Meanwhile, Kane has been linked with a future move to German giants Bayern Munich who are looking for a striker after the departure of Robert Lewandowski to FC Barcelona.

A special guest at the Home of Cricket this evening ⚽️

Bayern Munich manager Julian Nagelsmann and CEO Olivier Kahn have often been seen sharing their admiration for the English star.

Nagelsmann had said, “He’s very expensive. That’s the problem – but a brilliant player. [He’s] one of the best forwards. Perhaps one of two or three who can play as a centre forward [as well as a] No 10, but he’s very strong, brilliant with [his] head and both feet. He could score a lot in the Bundesliga, I don’t know the price, but it’s really tough for Bayern Munich. We’ll see what happens in the future.”

With Bayern publicly expressing their desire to bring Kane to Allianz Arena, reports have emerged that Spurs may offer their prized possession a new contract to thwart any attempt to lure him away from White Hart Lane. 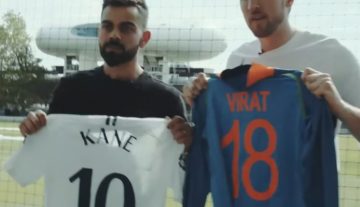