India opener Mayank Agarwal has finally found his lost form going to the two-match Test series against New Zealand XI. Along with him, Rishabh Pant also scored well in India’s warm-up fixture against New Zealand XI that ended in a draw in Hamilton on Sunday. The match was called off an hour after lunch with India were at 252 for four just 48 overs into their second innings.

Mayank Agarwal, who had gone through a rough patch since the second Test against Bangladesh, retired hurt on 81 off 99 balls with 10 fours and three sixes to his name as well. To the relief of the Indian team management, Pant played a quickfire knock to reach 70 off 65 balls and hit some great big sixes as well.

There were four sixes and two of each came off leg-spinner Ish Sodhi and off-spinner Henry Cooper. While Sodhi was hit down the ground, Cooper was smashed over extra cover on a few times. However, he didn’t only his aggression throughout; he also defended against the spinners and also left some of the deliveries that the Kiwi pacers bowled.

However, his innings might have come too late in the series as Saha is a better keeper in respect to Pant and even more responsible batsman in pressure situations as well. However, the biggest positive was Mayank Agarwal’s knock. Before that, Agarwal had played 10 competitive games which included first-class, ODIs and List A matches as well but he failed to cross the 40-run mark in 11 completed innings he played.

The Agarwal-Pant pair stitched 100 runs in 14.3 overs and it also helped after Prithvi Shaw (39 off 31 balls) was bowled after adding 72-run stand with Agarwal. However, it was Shubman Gill who would probably like to forget the series as he failed to score in both innings. He scored 8 before Daryl Mitchell trapped him leg before in the game. 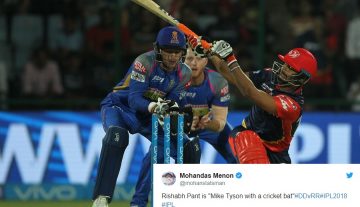