Dharamsala, they say, is the most beautiful stadium in the World. Every time they flash a camera during one of the mid-session breaks, you see lush green mountains backed by exotic looking snow-capped peaks. It can be described as a stadium where bowlers precisely look like running in from the Himalayas end. The air is crisp and clean; the stadium beautiful and the setup, magnificent. How does it feel like playing Cricket there? Must be special, I’m sure. And how often does the game itself beat the stadium’s magnificence? Well, let’s keep the statistical survey for another day. This Test has surely been one of those where the game’s magnificence has taken over Dharamsala’s. The number of twists and turns as the story has gradually unfolded will give an Agatha Christie best-seller a serious run for its money. At point could you have picked up a definite winner and during those slim moments when you thought you could, a new twist has turned the game on its head. The Day 3, though, has more or less settled it – the match and hence the series.

India started the day at 248/6, still 52 runs behind Australia’s 300. Ravindra Jadeja was adjudged caught behind off the very first ball of the day. He went on to review as instantly as he could, and you could clearly see daylight between the bat and ball as a result of which, the decision was overturned. After that, though, Jadeja and Saha orchestrated a tremendous partnership; the former scored quickly, driving elegantly and lofting with precision; the latter defended and gave the former the freedom to do so. Together, they added another 69 to their overnight tally of 27 and thus, stitched together an extremely important partnership of 97 before Jadeja inside edged one off Cummins on to his stumps. He was out after scoring a flamboyant 63 off 95. Years down the line, when an uninitiated takes a look at the scorecard, they won’t certainly understand how paramount Jadeja’s knock was in the context of not just the game, but the series as well. For now, let me say this – we have witnessed a knock that most certainly has turned the game on its head. Had it not for Jadeja, India would surely have been left catching up and would have had to face the uphill task of chasing a tricky score in the fourth innings. After Jadeja, though, wickets fell in quick succession. From being 317/6, India were reduced to 319/9, with O’Keefe removing Bhuvaneshwar Kumar for a duck and Cummins removing Saha with a brut of a bouncer. Smith took a tremendous catch as Saha walked back after making a composed and important 31. Kuldeep Yadav and Umesh Yadav added fourteen for the tenth wicket before Lyon removed Kuldeep for 7. India were all out for 332. Lyon ended with yet another fifer, getting 5/92 off his 34.

Australia trailed by 32 when David Warner and Matt Renshaw started the innings. Warner’s horror series continued as his weak footwork was exposed once again by Umesh Yadav, who has consistently troubled the Australian batsmen and has bowled exceedingly well. Warner tried to push at a back-of-a-length delivery that moved slightly away from him after pitching, even as his front-foot went nowhere, and nicked it straight into Saha’s gloves. Steve Smith arrived, looking as fidgety as ever, and struck three beaming boundaries and took the score to 31/1. And then, call it over-confidence or call it error-of judgement, he tried to pull one off Bhuvaneshwar and ended up dragging it on to his off-stump. The off-stump went for a ride around the park, as if to take a look at the vivacious mountains in the back ground; Bhuvaneshwar Kumar was deliriously overjoyed, so were the Indians; and Smith could be seen in despair, probably having kissed the shimmering Border-Gavaskar Trophy good-bye. Right in the next over, Matt Renshaw couldn’t handle one that straightened and nicked it to Saha, yet again off Umesh, whose bowling kept getting better and better. Smith scored 17 off 15 while Renshaw a paltry 8 off 33 as Australia were reduced to 31/3, still trailing by a run. Handscomb was joined by Maxwell and Maxwell immediately started doing what he does best – attack with poise and aplomb – he targeted Kuldeep Yadav, the mystery chinaman who troubled them in the first innings, playing his debut game. Maxwell looked good and just when the Australians started rebuilding their innings in a bid to post a challenging total, but Handscomb was caught belligerently by Rahane off Ashwin on 18. Marsh walked in for a short stay and was caught on 1 off Jadeja. From being 87/3, Australia were yet again reduced to 92/5. Maxwell was adjudged LBW off Ashwin when he tried to simply pad one away. The review was taken but on-field umpire’s call stayed. Maxwell made 45 off 60. Matthew Wade offered some resistance but soon ran out of partners as Pat Cummins scored 12 and O’keefe and Lyon both got out on duck. Wade scored 25 even as Hazlewood played 9 balls before he too was out on duck. Australia were eventually bowled out for a paltry 137. Umesh Yadav was the pick of the bowlers with 3/29 off 10 overs, with Ashwin and Jadeja too getting 3 each, and Bhivaneshwar got the priced scalp of Smith. Umesh Yadav, though, generated great pace and bowled decent, tight lines and bowled nasty bouncers with great control and uncharacteristic impudence, never letting any off the Aussies get on top of him. He could have easily had his fourth when Ashwin dropped Wade in the slips, a sitter he’ll take 99/100 times. All in all, it was a fantastic display of bowling by the Indian bowlers.

Needing 106 to win, India started off their innings with six overs left in the day’s play. KL Rahul started off with three boundaries off the first Cummins over, the first one being an edge that escaped through the third slip and gully. The second was a flamboyant drive and the third a push towards the square-leg region. Vijay and KL saw off the remaining 5 overs safely and India ended the day at 19/0, well-positioned to complete a clinical victory tomorrow. India will want to finish the game without any further hiccups while the odd-bounce that Lyon capitalised on will keep the Aussies interested, who will try to press for two or three quick wickets. More tomorrow after the game… 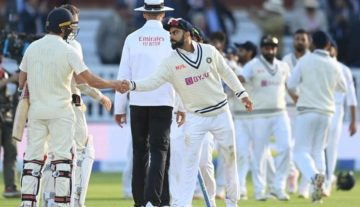