Virat Kohli and his men commenced the series with a 31-run win over the hosts in Adelaide. The hosts then bounced back with a 146-run victory in the second Test in Perth before the visitors won the third one at the MCG to take an unassailable lead. India would have won the fourth match as well but the rains gods save the day for the hosts and save them for a demoralizing innings defeat.

India will have a chance to extend their recent dominance over Australia when they tour Australia once again later this year. However, legendary Australian skipper, Sunil Gavaskar reckons that the Virat Kohli-led side will face a much difficult task this time around.

Gavaskar said that the hosts will be a different team this time because of the presence of veterans like Steve Smith and David Warner. Both the players were not a part of the last series because they were serving the ban imposed on them for the ball-tampering scandal.

As per the quotes in Dainik Jagran, Gavaskar said, “I think there will be some changes in Team India this time. There will be bounce on the pitch but batting won’t be difficult after a few overs with the new ball. With Steve Smith and David Warner in the side, surely, it won’t be easy for India to win. Australian batsmen will also do homework on Jasprit Bumrah and others.”

Smith and Warner made their comeback to Test cricket through the Ashes last year and the former took the series by storm. 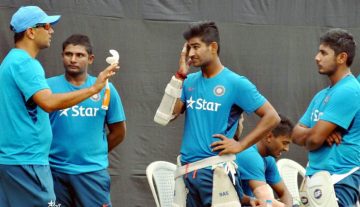 News
By Aditya Pratap - Jan 30, 2018
Dravid is successfully passing his qualities into India U-19