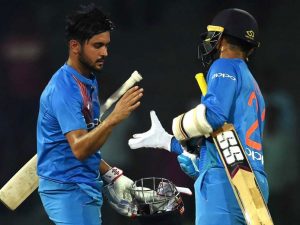 After India’s remarkable sojourn in South Africa, the selectors decided to rest the usual suspects in a bid to test the bench strength for the Nidahas Twenty20 tournament.

Names like Dinesh Karthik, Mohammed Siraj, Rishabh Pant, Shardul Thakur, and Jaydev Unadkat have always been on the fringes but have never got a long rope to show their worth. This series was thus one good opportunity for them to step up and give an account of themselves, and going by the performances of these players, they have vindicated that particular decision.

Perhaps, the greatest find of this tournament has to be Manish Pandey and after few decent knocks in South Africa, Pandey has done enough to convince the selectors that he should get a sustained run in India’s ODI setup and that number four position which still remains quite volatile.

The right hander has played a couple of well-measured innings coming in at number four and has shown not only the ability to rotate the strike, but also pulled out hefty strokes towards the end.

The other name which has done his reputation no harm is Dinesh Karthik and after spending a lot of time out in the cold, the wicket-keeper batsman has finally found his reckoning.

Perhaps, the Indian team management could look at him as another candidate who could slot in the middle order. He has experience on his side and has the game which is suited to both seam and spinners.

Also, he has added plenty of strokes to his repertoire which has increased his stock value and in this particular series, Karthik has been neat both behind and in front the stumps.

As far as the bowling stocks as concerned, there is a lot to be chuffed about. Shardul Thakur has been in and around the Indian side over the past few years and this series, he has shown the ability to take the next decisive step.

What will also gladden the heart of the selectors is his temperament. After being smoked in the first T20, he not only had his wits around him but put in a match-winning performance against Sri Lanka in their second encounter.

And then there is Washington Sundar who has only grown leaps and bounds ever since he made his debut. His ability to step up and take the new ball and then squeeze the oppositions stands out. Also, he picks up crucial wickets in the bargain and has become one prized candidate for India, in this particular format.

“Smart performance, especially from the bowlers. To restrict a batting unit like that, it was a great effort from the bowlers. The conditions weren’t easy for the bowlers, there was a bit of dew on the ground. Neither easy for the spinners nor the pacers, but they have executed their plans really well. Just continued where we left off against Bangladesh. The bowlers came out and executed the ideas and plans really well,” captain Rohit Sharma spoke after the match which reflects the mood permeating in the Indian camp.

With the overseas series lined up after the Indian Premier League, the depth in Indian cricket is sure to present a sweet headache for the selectors which only bodes well.

How adept is this quote for the richest cricketing body, which can saunter around with a lot of ease, for they have options, they have depth, and results to fall back on.

However, now the ball is firmly in the court of the selectors and how they handle these players, for with a lot of options come a lot of management ability and it is easy to allow a player to drift away, and thus it becomes imperative to keep them in the loop at all times!