After winning the toss, RCB’s captain Virat Kohli had put in the visitors to bat. On the back of Sanju Samson’s eight IPL half-century, Rajasthan Royals scored 217-4 in 20 overs.

RCB, at one point in time, looked set to chase the total. However, once Virat Kohli and AB de Villiers got out in quick succession, their chances of chasing the highest ever IPL total appeared bleak.

In their allotted quota of 20 overs, Bangalore ended up scoring 198-6. Kohli top-scored with 57 (20). His innings comprised of seven fours and two sixes.

Saying it again…Rahul Tripathi is wasted by RR at 6. Why buy him if you can’t fit him in the position that’s best suited for him? #RCBvRR #IPL

Umesh Yadav has conceded 50+ runs in an IPL match 5 times – the most by any bowler.

Rahane played a totally different brand of cricket. Still Trouble brewing for Short. One might bring two. Shortly after the power-play overs are done. #RCBvRR #IPL

Dont want to jump the gun,
But Rishabh Pant is just exaggeration, real talent is this guy #SanjuSamson
What a Talent!#RRvsSRH

#SanjuSamson a classic case , that justifies talent isn’t everything, keeps getting himself out at wrong times, after looking so good…#RRvsDD #IPL2018

Incredible batting from #sanjusamson..! Last 5 overs la 88 runs ah! totally justice to the 8cr he was bought for 👍👍 Paavam Umesh Yadav: last match 3 wickets in one over, this match 3 sixes in one over 😜 #RCBvRR #iplonstar

Amazing batting by #SanjuSamson. Hitting it clean, effortlessly. An absolute bucket smash for #RR, and for anybody who has him in their fantasy team. Huge total ahead for #RCB, fun chase coming on. #IPL

RR were struggling to get 170. Now they have 217 on the board. Thanks to Sanju Samson. Pure Class. #sanjusamson #ipl2018

What a Fantastic Innings by #SanjuSamson…. take a bow… What a batsman….
Indian Cricket Future with these players looks Very Safe…….#RRvRCB #Ipl2018

What a talented player #SanjuSamson! He is going to play for India soon and he is having very very bright future! #RCBvRR #IPL2018

With this talent Sanju Samson should have been playing for India. Amazing through-the-line shots. Effortless #RCBvRR

#sanjusamson super duper knock. It now needs the real collective batting might of @RCBTweets to pull this one off!

That was a special innings from Sanju Samson. Great Vishu gift. Love watching him bat. 217 even for RCB’s formidable batting line up is a daunting total #RCBvRR

#RCB had no answer to #RR's 💪🏻 #HallaBol! @rajasthanroyals have won the Royal battle comfortably! #RCBvRR

Effortless six hitting!! Lazy elegance about each of his last few hits Sanju Samson. Clearing the ropes with ease. Fantastic innings. This will take some getting @RCBTweets #RCBvRR

That one innings totally justifies the money he is getting paid. Brilliant. #IPL2018 #sanjusamson 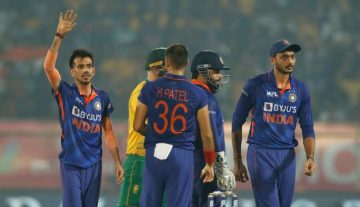