How can a team that has Virat Kohli-AB De Villiers-Chris Gayle, the holy trinity of T20 Cricket, not win even a single tournament? This question has been bugging the Royal Challengers Bangalore fans for quite a few years now. This season they don’t have Gayle but they have added good bowlers who will be able to support Virat and ABD. Will this be the year for three-time finalists, let’s have a look.

RCB have played in three finals so far which signifies that they have enjoyed good positions in at least three tournaments. Their best performance was in IPL 2011 season. If you remember, this was the season where the ‘Universe Boss’ Chris Gayle truly arrived on the IPL scene. In a beastly season, he top-scored with 608 runs that included two centuries.

Despite the fact that they were heavily criticised for picking a terrible team for the maiden IPL season, RCB’s real horror season was 2017. Even though they were packed with superstars, they just could not win any matches.

The season was full of disappointment. They hit their lowest when they recorded the lowest-ever team total in IPL when RCB was all out for only 49 against Kolkata Knight Riders at Eden Gardens. Not even a single batsman could get the double-figure score.

It is no secret that the biggest strength of Royal Challengers Bangalore this year lies in two names – Virat Kohli and AB De Villiers. Both have magical powers in them when it comes to batting. Both are entering the tournament in the supreme form, much will be expected from these two.

The spin department of RCB also looks very solid. Yuzvendra Chahal is one of the smartest T20 bowlers in the world right now, he is fabulous in assessing the conditions and the batsman. Washington Sundar bowled brilliantly well in the recent Nidahas Trophy. The Spin duo of Sundar and Chahal will be very interesting to look forward to.

All-rounders are the keystone of any T20 team. RCB have three of the best in Chris Woakes, Colin De Grandhomme and Moeen Ali. With these, they can effectively shuffle their team combo according to the conditions and still field a very good side.

It is very difficult to find a weakness in this super squad. Virat Kohli and AB De Villiers can cover any weakness which may show up.

The only real weakness that may come up is the lack of a good Indian fast bowler. Both Umesh Yadav and Mohammad Siraj are known to be very erratic. They may not be able to stop the run-flow and may leak the pressure built by spinners.

Apart from this, the squad really looks well-balanced.

Royal Challengers Bangalore look really solid on the paper but they look like this every year. This year they will have to exhibit top performances and teamwork if they are to lift the IPL trophy. One cannot help but feel that this year has to be the golden chance for RCB, next year they may not possess same brilliance. 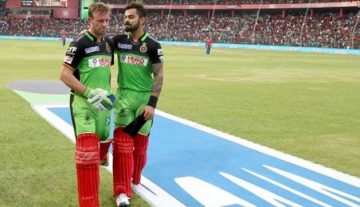