During the fifth match of the 11th season of the Indian Premier League (IPL) between Chennai Super Kings and Kolkata Knight Riders at Chennai, Tom Curran showed an eye for an eye to Shane Watson after the veteran Australian all-rounder welcomed him to the IPL with a four and a six.

Chennai Super Kings raced to an exceptional start in their pursuit of chasing 203 runs to win the match. To put a counter to the same, IPL debutant Curran dismissed Watson in his first over. It all happened during the sixth over of the second innings.

Watson started the over with a pull which earned him four runs. He followed it with a six over the bowler’s head. However, on the penultimate delivery of the over, Curran made sure that he gets his man. Watson played a fierce pull shot, but played it straight in the hands of Rinku Singh, who was placed at deep midwicket for the same shot. Watson ended up scoring 42 (19) with the help of three fours and three sixes.

This was the second time in two matches when Watson missed to make his start count. Additionally, like in the previous match, he again found the lone fielder on the leg side. 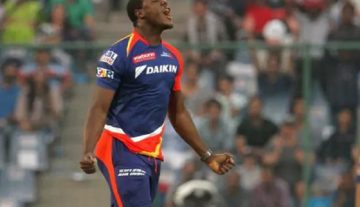